Guess I Didn't Deserve the Phillies .... 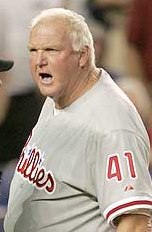 The ﻿Philadelphia Phillies, the best team in baseball throughout the 2011 baseball season, have fallen to the St. Louis Cardinals by a score of 1-0 in the fifth and deciding game of the National League Division Series (NLDS) between the two teams.

The loss places the Phils out of contention for the World Series ring that had seemed so within reach just a few weeks ago and plunges the entire City of Philadelphia into darkness!

Throughout the City and indeed the entire nation, virtually everyone knows who is responsible for this shocking upset.  It is one man alone, a man named:

﻿A resident of the Philadelphia area and a  self-professed Phillies fan, Mr. Block himself had earlier questioned whether he, a born loser, was worthy enough to be a fan of the Mighty Phillies.  The resounding answer:

"I'm flabberghasted!" said Phils' Manager Charlie Manuel. "How can one man --- one solitary Phillies fan --- be so totally unworthy as to sink an entire baseball team?!"

"You'd think Fate would have erred in favor of benefitting the undeserving loser rather than punishing an entire team and City," said Phils' ace Roy Halladay, who was charged with the loss. "I guess Fortune works in strange ways."

The City of Philadelphia is poised to file legal action against Mr. Block as soon as a reasonable cause of action can be determined.

"Oh, we'll get him!" vowed  a visibly shaken but determined Mayor Michael Nutter, "We'll get him!   Our best attorneys are researching guilt, bad karma, and annoying shlemiel as we speak!"

For his part, Mr. Block was in seclusion and offered no comment.

"My guess is that he feels one tiny little bit even less worthy than ever before..."

I was sitting in our local (St. Louis) suburb's pizza place last night when the game ended. I nearly decorated my wife with Canadian bacon and mushrooms.

Well, Glynn, looks like you have me to thank for it!

Can I hide out in your place in St. Louis until the bad karma has blown over?

I was just getting ready to tell you come on down to Cardinal country, Perry. We'll throw you a parade.

So I can be hoisted on everyone's shoulders and hear them sing:

Well, I was thinking more along the lines of rich people throwing money at you and beautiful girls running out in the street and showering you with kisses and adoring gazes. But, whatever . . .

If you tell them I'm rooting hard for the Brewers and things work out again for the Cards, then let's talk further about those beautiful girls ...