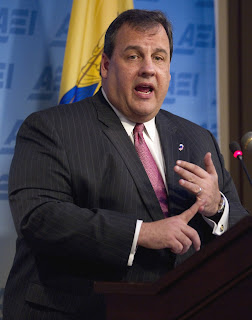 
If there's one thing that members of the Republican Party establishment agree on,  it's that New Jersey Governor Chris Christie is THE MAN!

Flamboyant and outspoken, Governor Christie seems to possess the twin virtues of calling 'em as he sees 'em and then living up to how he calls 'em and sees 'em, regardless of whether you agree with everything he's calling and seeing.  These days in politics, those are two rather rare commodities. But will the current fair-haired boy of the GOP ever be their Presidential standard bearer?

That's because whenever most of us see the corpulent Mr. Christie we just can't help making jokes about his size, after which we feel guilty about how insensitive we are.  And nobody but nobody wants to elect a President, no matter how capable, who winds up making us all feel worse about ourselves ....

"As we all know, last week Governor Chris Christie made the decision not to run for President.  Instead he plans to waddle for President.  I'd sure like to see him get elected because that would bring new meaning to the term 'Oval Office!'"


What kind of insensitive person am I? That wasn't nice.

"Did you hear the news?  New Jersey has just declared hot fudge an endangered species!"

Why the hell did I say that?  I must really be a jerk!

No doubt at all;  I am a worthless piece of crap!

"I understand Chris Christie's trying to take better care of himself.  He's making it a point to drink eight bodies of water a day!"

"How are Chris Christie, a gullible person, and a hooker alike?  None of them has ever found anything too big to swallow."

"Too bad.  At the press conference he held in 2015 to announce his candidacy for President,  Governor Christie blew the first question.  It was:

I am going to rot in hell.  Here, Satan, I brought you the marshmallows too!

Poor Governor Christie! Thanks to yahoos like us, he'll most likely wind up in a totally irrelevant, unimportant, obscure political office where nobody will ever see him, think about him,  or make stupid and insensitive jokes about him.

Now fellow low-lifer  what new Chris Christie jokes ya got for me?!