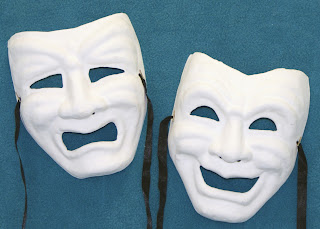 
Mise-En-Scene: It’s a Sunday afternoon in late November 2011, and the scene is a lovely and tasteful home in the Philadelphia suburbs.  It is something like your home assuming you are a wildly out-of-control impulse buyer whenever confronted by saturation advertising from Raymour & Flanigan.

It is, however, in fact the home of Fred Burton, who is having a few of his close friends  --- Bill Grates, Alex de Rigor, and Sam Mishkin  --- over to watch the Philadelphia Eagles take on their arch rival Dallas Cowboys.   Bill and Alex are already at Fred’s house, but Sam  has yet to arrive ….


Fred: Here it is, guys: Eagles-Cowboys!  We wait all year long for this.

Alex: Dallas, we hold you in malice!

Bill: Yeah, but I still can’t get used to Michael Vick as the Eagles quarterback. The man's a monster, let’s face it!

Fred: I know. We have to root for him, but it’s not easy.

Alex:  And you know why?  Cause we’re all dog lovers here!

Comet jumps into Alex’s lap, who begins patting him vigorously. The game begins.

Al Michaels:  .... and ball is back to Michael Vick … play action …  just like Andy Reid to go for a big passing play early in the game ….

Al Michaels: Michael Vick uncorks it. Perfect pass to an open DeSean Jackson, a 60-plus yard play! What a pass by Michael Vick!

Alex: Well, it is kind of disgusting.  (to Comet) Hey, stop that, you’re slobbering all over me!

Fred: He’s not going to drool, is he?

Al Michaels: What’s this?!! Vick fumbles on the two yard line! And the ball is recovered by …. Dallas!

Bill: Looks like a good strong dog too. Maybe during halftime we can take Comet outside for a catch. Got any treats to reward him?

Comet runs over to Fred and jumps up on the sofa where Fred is sitting.

Al Michaels: And the Cowboys are marching down the field and …. Interception!  Eagles’ ball!  Mike Vick and the offense coming back on the field.

Fred:  He sure does and  …. Oh my God, Sam, get your dog offa me!!  I can’t have a mutt shedding on my new Raymour & Flanigan Kathy Ireland Collection Pastel Pattern Sleep Sofa!

Bill: And what if he shits! I hate when that happens!

Alex: I’ll bet he has fleas too!

Al Michaels: …. and Vick is thrown for a loss! Terrible play!

Alex: And you know why? Cause we’re all dog lovers here!