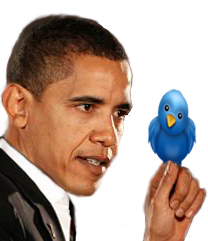 The number of followers of the official verified Twitter Account of the President of the United States, @BarackObama, has plummeted from 9,437,823 in late July to 473.

And, as pointed out by both The Washington Post and The New York Times, most of Obama’s remaining followers have exceeding goofy avatars. Here’s a random three:

In an effort to stem the tide, Mr. Obama has directly taken over day to day responsibility for his Twitter, Facebook, and Tumblr accounts as well as for his special interest blog on interior decorating, “Soft Furnishings Today!”

“WTF?!!” the President tweeted yesterday. “I make sure to LOL & ROTFLMAO my own jokes, tweet about bacon, & never miss the opportunity to say WOOT!”


Apparently Mr. Obama is just as clueless about Twitter as he is about what we want him to be doing all the rest of his time!


Rumors are that the President is moving over to Google + where lots of down and out Democrats are hiding out.  Whether any will be willing to include Mr. Obama in their circles is open to question.

"Geez, sorry!" said one Nancy Pelosi yesterday, "but my Acquaintance Circle's ... umm ... all filled up!" *whistling*

No, don't do it, @DavidHasselhoff!