"The Leader of the Laundromat" in the Year of Perry Block 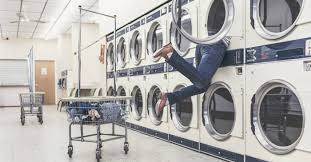 A coast to coast tour of fine bookstores throughout the country?

A swing up and down the East Coast speaking to major literary societies?

Nah, none of that.

My budget for promoting Nouveau Old, Formerly Cute is slightly less than my budget for Pez in 1957, so I’ve just completed a forced tour de force of laundromats throughout Havertown PA. On the bulletin boards in these laundromats I post information for the home washer/dryer-less set about the belly laughs that await after they wrap it all up with their color-fast colors and whiter whites.

“What are you posting?” asked a guy walking up to me.

“It’s about a book that I’ve written.  It’s called … where you going?”

“I thought maybe you had kittens to give away.”

Another guy approached and I could sense his growing interest.

“Got any quarters, Bub?”

And next, a nice woman.

“Be a dear and go grab the bleach, okay, sweetie?"

For my next laundromat, I thought I’d try to bond with the patrons right from the start.

“Folks,” I began, “I know how miserable it must be having to sit here hours on end because you don’t have the money to buy your own washer and dryer like normal people.  But look on the bright side:  better to be here than to go down to the river to beat your clothes against a rock.”

“Who do you think you are, elitist schmuck?” snarled a young dude looking up from his phone. “I’m studying to be a doctor.”

“And I’m a Renaissance scholar doing research in Philly," said another,"and my temporary living quarters have no laundry room.”

“I can’t afford a washer/dryer just like you say,” snapped a third, “but you’re still an asshole!”

Okay. Not going to sell any books here.

I made for the final washing emporium on the list and was just tidying up my posting when an attractive 40ish woman came up to me.

“Are you giving away kittens?” she asked.

“Promoting a World Affairs Forum, then?”

“BOR-ING!” she replied, and began to walk away.

“If I get you some kittens, teach you French, and set up a World Affairs Forum.”

“All right. But mostly I’m interested in the French.”

What we writers on a shoestring budget go through!

But I’ll keep at it.

You see, that’s me --- the Leader of the Laundromat, here in The Year of Perry Block.

You'd have to be pretty old if you remember the song The Leader of the Laundromat, which was itself a parody of another song called The Leader of the Pack, both of them from the early 60's.  If you liked this post, I hope you're way too young to remember these songs.  If you hated this post, I hope you're old enough you might have written them!
Posted by Perry Block at 12:04 PM

Email ThisBlogThis!Share to TwitterShare to FacebookShare to Pinterest
Labels: laundromats, My Baby Boomer Life, The Year of Perry Block