The Boy Who Shoots the Arrows 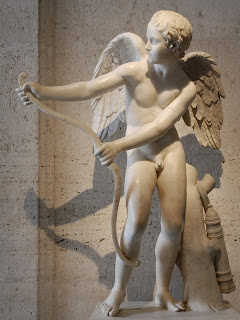 What was surprising, however, was the person he chose to be his co-author.
I had placed an ad on Craig's List a couple of weeks earlier offering my services as a free lance writer. To bolster my chances of attracting clients, I listed myself under the category "Craig's List Service Providers Who Won't Kill You."  It wasn't long before the phone rang.

"This is Cupid, former God of Love. I know you won't kill me, but do you also work cheap?"

"If you're Cupid, tell me something about my dating life."

"Any time I had you in my sights I was either drunk, stoned, or otherwise unable to hit the side of Governor Christie."

We arranged to check each other out in a nearby Starbucks, and after cashing in my 401 (k), I headed for Starbucks to meet the once and former God of Love. I had little trouble recognizing him as of the three or four people in the place in loin cloths with fluffy wings, Cupid was the only one under 3 feet, 6.

"I want to write my life story," said Cupid, "but I need some help."

"I am to the written word what Zeus is to celibacy."

"Okay, let's try it out," I suggested. "What was your title when you were a  god on Olympus?"

"Why did you leave the Godhood?"

"Brutal hours. Any time somebody falls in love, me and my trusty bow and arrow got to be there. You have any idea how many Bar Mitzvahs I had to up and leave? I used to practically live with Jerry Lee Lewis!"

"Must be some pretty heavy legal liability too."

"You kidding? Flo from Progressive doesn't even answer my calls any more."

"You still don't ask that question, especially when you're talking to somebody who hung with guys named Flavius!"

And so we began work in earnest. Cupid had been down and out for quite some time since leaving his job on Olympus.  He had worked a number of holidays including Groundhog's Day, National Squash Day, and Bob Saget's Birthday. He'd also done some freelance work getting young women to fall in love with Hugh Hefner and Rupert Murdoch, but he'd always throw up afterwards.

One of the most surprising things I've learned is that Cupid himself designed the original "love heart" with the arrow passing through it. Unfortunately he never had it copyrighted and in 1950's it was stolen lock, stock, and barrel by actress Lucille Ball. He never saw a drachma.

"What do you plan to call our book?"  I asked Cupid.

"The Boy Who Shoots the Arrows, by Cupid as told to Perry Block."

Watch for it, folks, coming to an Amazon near you!

Thank you! Maybe I'll do Gods on Olympus posts only from now on.

It pains me to do this, but I'm going to have to agree with Intangible. This is the best work I've ever seen from you, Perry Block, and I've read a lot of your dribble.

This should be in Huffington Post, The New Yorker, or one of those other uppity online rags, where it would get read by more than four people. Hang on to it and submit it around Thanksgiving. Maybe one of them will publish it. You can even submit it under my name if you want to.

I like it, but I didn't think it was that great. It must be Cupid, not me. In any event, this theme will continue from time to time and we'll even work Perry's lazy self-serving muse as well. Soon it will advance to dribble, first class!

Slow down, Hoss. We don't want you becoming the next Dave Barry, that's my job. Just go back to your usual dribble and forget I said anything complimentary.

Too late, we've already called in the gold bricking muse and he and Cupid ought to be quite a pair eating Perry out of house and home, drinking his beer, and goosing his girlfriend as long as she lasts. I doubt Dave Barry will be taking note.