The Legend of Johnny Applehead (FF) 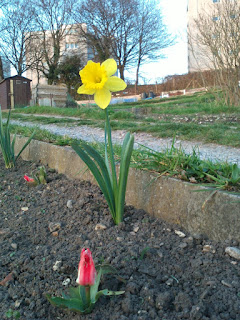 According to popular legend, in the early part of the 1800's a man named John Clapman traveled about the countryside in Pennsylvania, Ohio, Indiana, and elsewhere planting apple trees.

Often going barefoot with no place to sleep at night, John Clapman was dedicated to beautifying the landscape of the new nation.  Over time, he became known as Johnny Applehead.

As Johnny Applehead continued his travels he began planting flowers, shrubs, and bushes as well as apple trees.  Soon he also began leaving garden gnomes, small windmills, picket fences, metal chimes, and aprons with the words "Kiss Me, I’m the Cook" on them.

Today Johnny Applehead Enterprises is America’s largest distributor of garden gnomes and barbecue aprons. According to popular legend, the man named John Clapman was no fool.

Also awesome are all of the Friday Fictioneers, whose takes on the above picture prompt will blossom if you click here.

Now, who wants to order some chimes?

How many Clapman ancestors share the proceeds of Johnny's foresight, I wonder?

The Gnomes brings the biggest profit I'm sure. Nice one.

I come here to read and learn. You have enriched my knowledge once more.

Where did my comment go? Did you get it? My laptop went weird... I'm going to blame the stupid Blogger interface - can't possibly have been user error.

Anyway, what it said was I've missed reading your stories. It's nice to be back, however briefly.

Ah... yes our garden is filled with a collection of garden gnomes... :-) If just my neighbors could see the value they give to our neighborhood... but they insist that they are tacky.

Seems he certainly was no fool :)

Well, thank you so much for this little lesson of Johnny Applehead! Of course, the gnomes came from somewhere. And we must have metal chimes! Nothing is quite the same without them, Perry.

A cute story all wrapped up in a history lesson. What more could we ask for? ;-)

Great fun. He was an entrepreneur. No fool indeed.

Hilarious, Perry. This business a sideline of yours then. Mr. Applehead seemed to know the taste of gardening Americans and barbecue enthusiasts. I had no idea ourdoor barbecues went back that far. I have indeed learned something today. Mr. Applehead no doubt learned his skills from the Native Americans. It was probably their way of making the white man look rediculous. :D --- Suzanne

I think I mispelled "riciculous"forgetting my grammerly spellcheck doesn't work on your program.Perhaps the spirit of Mr. Applehead has played a joke on me. That's as good an excuse as any I guess. :D

I must be getting tired. I mispelled ridiculous a second time. It's starting to look ridiculous. :D


I believe we have a Johnny Applehead outlet here in Virginia. ;)

Well, however many Clapmen there were, I guess.

Yeah, but the "Kiss Me" aprons are second.

Yes, that is why I am here. For your enrichment only.

Thanks, Jen, I appreciate that. I always like your stories too. And yes, there's something crazy about blogger interface all that messes up comments, especially the nice ones I write to myself.

"They are tacky" are fighting words to the Johnny Applehead family.

What a good point, sounds like the girls for me! Perhaps I can come live in your garden. (I can come in to eat, right?)

Yeah, but I hope he wore shoes. That wasn't so smart to travel five or six states, even if he did put slippers on.

Something funny, I would think, but glad you're not pushing for that.

Yes he was a 19th century Donald Trump only without the hair and the being nuts.

Mr. Applehead indeed learned his skills from native Americans because the Europeans had no apron saying "Kiss Me I'm the Cook." But once they did they no doubt looked ridiculous, or however you spell it.

Mr. Applehead couldn't spell it either.

I never knew you misspelled it once to let you know who looks ridiculous.

One of the biggest. I heard you're an investor.

I come here to waste my time.(and to have fun) I'm never disappointed. Why is it that I see Russell's face on one of those garden gnomes?