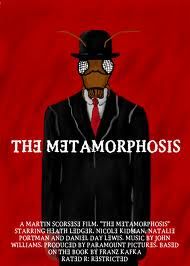 Human Resources professionals may soon be girding themselves for one of the most difficult challenges HR has faced since the question of whether to allow tank tops at the company picnic.

That challenge?  A new cause of action against your company known as "Insectual Harassment."

A hotly contested legal case is now wending its way through the courts and if it continues wending, it'll soon be wending your way. It began last August when a 37 year old man named Gregor Samsa awoke from uneasy dreams and found himself transformed in his bed into a gigantic insect.  In his own words:

"I was lying on my hard back and when I lifted my head a little I could see my dome-like brown belly divided into stiff arched segments and my numerous legs, which were pitifully thin, waving helplessly before my eyes.  'What is happening to me?' I wondered.  And I must remember to cancel the exterminator for Thursday."

Mr. Samsa's day did not improve when he went in to work and encountered a number of his co-workers attempting to step on him.  Mr. Samsa was shortly called in to see the HR Manager who told Mr. Samsa that he was being terminated on the spot but at least offered him healthy severance in the form of not squashing him on the way out.


Practice Pointers:  Do not act hastily when an employee comes into work one morning and has been turned overnight into an enormous bug. Take time to speak with the bug.  Offer the bug a cup of smaller insects and remember to banish the word "eeek" from your vocabulary. Do not swat the bug. Try to determine if the bug can still perform his or her job effectively.  If you run a hand modeling agency, well, that may be a problem.

Protected classes of employees under the federal anti-discrimination laws are race, religion, gender, age, nationality, military status, and disability but not being transformed overnight into a giant bug.  Some states have recognized additional classes such as sexual preference, transgender status, and having an innee rather than an outtee.

Samsa v. Shearson Lehman is now poised to add Insectual Harassment to the list. In an analogous case, Lot v. Morton's Salt, Mr. Lot’s wife underwent a similar spontaneous transformation as Mr. Samsa although instead of being transformed into a bug she was transformed into a pillar of salt.  Her anti-discrimination claim was rejected, however, because although Mrs. Lot was tasty, being granules of salt as opposed to a whole person prohibited her from performing her job duties as a spot welder.

Practice Pointers: Being transformed overnight into a bug may well be considered a disability similar to being turned into a pillar of salt, although salt is generally more welcome at your dinner table.  If the disabled bug can yet perform his essential job duties, described as those duties a worker cannot shirk no matter how many times he can convince you his grandmother died, you might have to provide the bug reasonable accommodation such as getting him an ergonomic chair, affording him special hours, or providing him human blood to suck on at breaks.
As the case nears trial, Mr. Samsa is sanguine about its prospects although it's hard to tell if he is truly sanguine since he is kind of a mottled brown.  A positive determination would make all Insectual Harassment illegal including the most insidious kind of Insectual Harassment of them all, Quid Pro Quo Insectual Harassment. This is the type of harassment in which  a supervisor or manager offers a promotion, raise or other job benefits to a bug in exchange for the bug agreeing never to have sex with him.

Practice Pointers:  Now is the time to make your workplace "Employee-Turned-Overnight-Into-A-Bug Friendly."  Do not require a human being turned into a bug to sit on the venetian blinds in a meeting instead of in a regular seat. Don't tell a joke such as "What has 18 legs and six boobs?" even if the answer is the Supreme Court. Promise that complaints of Insectual Harassment will be investigated promptly and thoroughly with appropriate discipline imposed for any offenders up to and including stinging the shit out of them.

As the Samsa litigation wends forward, Your Daily Dose of HR Doings will continue to keep you fully informed, provided you continue paying the $49.99 a year subscription price. With careful planning, sensitivity, and training, you too can handle Insectual Harassment like a Human Resources pro!

Even though HR still won’t get no respect.

Tomorrow: The case of Gilligan v. Skipper   ---   It was supposed to be only a three hour tour.  Is Mr. Gilligan entitled to overtime for all time spent on that dopey island?

Funny and useful in a strange insectual way.
T

And these rules go double for doctors who are turned into bugs overnight!

Our legal department has employed over-sized cockroaches for years and with splendid success. They've done a great job of disposing of those maggots from PETA who keep fighting for the rights of tasty animals.

Good for your company! Except it runs afoul of the affirmative action for maggots policy, so you in a heap o' trouble, boy!