The World's Only Singing Bird (FF) 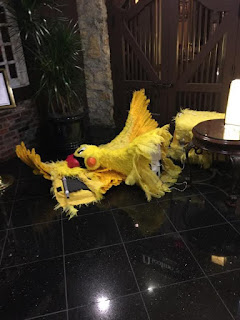 Henry Squawkster was disillusioned, dejected, and half passed out on the floor of his backstage dressing room.

"I cannot do the act as the World's Only Singing Bird one more time," thought Henry. I cannot face another audience! Every day's an endless stream of cigarettes and magazines ..."

"Get up and get yourself together!" barked Henry's manager, Herbert Cohen. "The audience is depending upon you."

Cohen shoved Henry onstage with his guitar. Near feverish with booze and exhaustion, Henry gazed through the wire mesh fence into the audience of calico, Siamese, and alley cats, all licking their chops.

"If only I could perform in front of an audience of humans," muttered Henry, "instead of this damn social media world of cats!"

Yes, Henry tawt he taw a puddy tat and he did, he did taw a puddy tat!  A whole audience full of them too. True, Henry has a lot of fans, but most of them are fans of his flavor, not his musical favorings.

Henry hitting the bottom is what I saw this week in the picture prompt above as part of the Friday Fictioneers Weekly Traveling Variety Show & Concert. Offerings of the other Friday Fictioneers are available by buying your ticket, taking your seat, and clicking here.

Good for Henry, he made it through another performance. No, Henry, don't give autographs!

Poor Henry! What a life. And no autographs for sure. Very fun.

Well, I can get you one.

I'm trying so hard not to make a comment about pussy cats. :( Poor Henry.

You have me humming Homeward Bound. Intimidating audience that. I'm afraid he has little more than a wing and a prayer.

Sometimes social media is like a alley of cats. Poor Henry. Fun read.

Talk about a rough crowd, they'll eat you alive. Maybe he can get a job as Paul Simon's new partner.

Thank you! Actually I think cat pictures are tailing off. But not fast enough for Henry.

Hadn't though of that but you're right. Let's hear Henry Squawster in a rousing version of "Rawhide!"

Was this before or after the Broadway production of "Cats?"

I think before. Andrew Lloyd Weber saw Henry's next show and some unexpected interaction with the audience and wrote a song about Henry, called "Memories."

You could say they just ate up the act!

I really felt for Henry. Your dazzling portrayal of the uniqueness of the dejected chicken, dehumanized in the nefarious current world context of electronic jibber-jabberish, can only lead to an utter outcome of depression and self-defecation, and, ultimately, in chicken-shit.

I am sending you the last of my regards...
Randy Rooster

I can't wait to see the video of this. Perry behind poultry wire. It has a nice ring to it. Especially, around the holidays.

Poor bird. Life isn't fair. Those cats get all the glory, too, especially on the Internet. Great job, Perry.

The last? I'm still waiting for the first.

Too bad for Henry, it's "Hello Darkness, my old friend."

Sure, whey shouldn't I play Henry? I've got the disillusioned, dejected, and half passed out on the floor part down pat.

Yep, the guy could have really soared in another business.

Yeah, but boy can Henry Squawkster sing. I mean, boy, could he sing.

Oh, that was funny Perry!

Thanks, Dawn. The late Henry Squawkster thanks you too.

No, Perry, Henry should definitely not try to get autographs, unless he wants to commit suicide. I wondered where those internet cats go when you don't see them. Well done. :D --- Suzanne

When do you ever not see them? Thanks, Suzanne.

LOL. Good story. Poor Henry. Had to laugh at No Henry. Don't give autographs.

Ha! Ha! Henry should have performed to the music of Victor Squawkster

Thanks, Irene. Oh Henry, then No Henry.