To My Younger Self 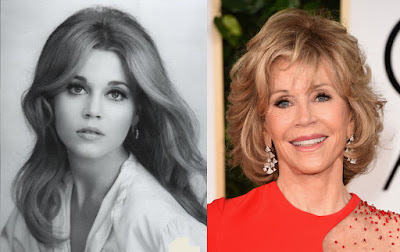 Now there's a younger self
I'd like to communicate with!

One of the current trends in our culture is the concept of going back in time to speak directly to our younger selves. That is, after first killing Baby Hitler, saving Abraham Lincoln, and learning the secrets from Benjamin Franklin on being a 60 plus year old babe magnet.

The latest celebrity to join the trend is Jane Fonda, who in a recorded letter to her prior self urges young Jane not to make Barbarella, to stop marrying such widely diverse husbands, and to limit face lifts to fewer than one per meal.
It seemed to me that sharing my wit and wisdom with a pint-sized Perry would be pretty cool too, especially since no one else will listen to it. So I suspended my disbelief, climbed into the Way Back Machine, and traveled way back to 1962.

You see, I'm Perry Block too.

Perry, I've come here to share some important thoughts with you.  Please hold your applause until the end.

1) Remember to always follow the path of Judaism, because it will lead you to deep spirituality, great Chinese food, and well-to-do Jewish girls. Also I wouldn't want God to squash you like a bug.

2) Do not waste your time or effort with argumentative or difficult persons. They are vexations to the soul. Just let them steal your lunch money and move on.

3) Find your passion.  Maybe you left it in the car.  Check the couch cushions next.

4) Do not get involved with mind-altering drugs!   After you thoroughly ignore this, never settle for twigs and seeds.

6) Don't waste much time watching television. Instead, do whatever it is you see on television that looks like something you'd like to try. I wouldn't go dueling with Zorro though.

7) In college you will meet a blonde girl with blue eyes and a great bod named Alice Bernstein.  Even if you have to invoke Satan, summon the guts to ask her out!  Make me some memories.

8) There will be a comedian on television named Bill Cosby. Tell people you think he sucks.  It may take a while, but I promise this will pay off for you.

9) Coke, not Pepsi.  Although be prepared  to weather an unbelievably whacked time in the late 80's with something called "New Coke."

10) Democrats, not Republicans.  If there's any doubt about this wait till you see the asshole they're planning to run for President in 2016.

11) Mary Ann, not Ginger.  I know it's counter-intuitive, kid; just trust me on this.

12) Exercise regularly. Once a year every year without fail.

14) Do not waste time being jealous of others. Get right to undermining them.

16) Remember these names: John, Paul, George, and Ringo. They will change your life.

17) And say goodbye to that goofy pompadour. They will change your hair too.

18) Become proficient in a sport because it will make you popular. I recommend curling.

19) Become a humor writer for your Great Second Act in Life. You will at long last fully indulge your creative and aesthetic spirit as you slowly starve to death.

20) Don't leave anything on the table, kid. Do what you want to do, go where you want to go, follow every dream you have. You won't be young forever.

And Perry, this is the most important thing I have to tell you. Don't take for granted those people around you who are important to you.  I know you won't really understand this now, but they won't always be here.

When you're the one traveling back.

Nice one. For some strange reason I was thinking of writing a similar one. But now that you've already done it I'll give myself a break.

No, I think you should advise your younger self too. There are countless ways for us to screw them up.

Because I was so chicken it seemed to me like she was ten feet tall!