The Illustrious Dalai HaHa of Comedy 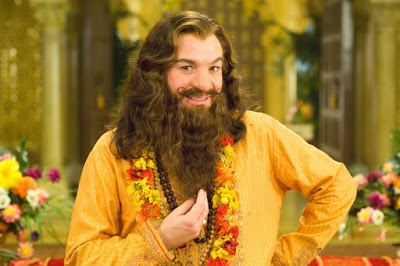 The Dalai HaHa of Comedy

It was hardly a secret that my humor writing career had been in the crapper. I had very few readers, didn't get many blog comments, and the last time I'd gotten a "like" on Facebook it had been to a post about my recurrent genital herpes.  Clearly something drastic had to be done.

And that something drastic suddenly materialized right before my very eyes in a conversation with fellow humor blogger Monroe Firth.

Author of a blog entitled Firth's Frivolities, Monroe was often very funny but had failed to find a significant audience on line, much like me except for the being very funny part. Monroe called me to say he was about to be going away.

"No, Perry, I go to seek the illustrious Dalai HaHa of Comedy."

"The Dalai HaHa of Comedy," said Monroe "is the one and only Grand Master of the Comedic Arts. He knows the secret to Perfect Comedy, and he also validates parking."

"Where does he dwell?" I asked. "Perhaps we could meet him for lunch?"

"He dwells in a place shrouded in mystery, veiled in secrecy, and wedged somewhere between the sofa cushions."

Monroe explained that he possessed a secret map to the dwelling place of the Dalai HaHa of Comedy which he would bestow upon me for safe keeping. In order to make sure it remained strictly confidential, I posted it on Facebook with pictures of a bunch of kittens.  Meanwhile my writing continued to suck so badly that I was declared eligible for Federal disaster relief by FEMA.

I decided finally to use the map to undertake my own personal quest for the illustrious Dalai HaHa of Comedy!

First I flew to Tibet and boy, were my arms tired!  (That joke alone ought to show you how badly I needed the Dalai HaHa.) Next I took a small commuter plane to the desolate and isolated town of Rudner at the foot of Mt. Ted McGinley, a tiny frigid outpost of 55 villagers whose favorite past times consisted of starving to death, carving ice sculptures in each other's breath, and ballroom dance.

It was there I secured the services of the only guide willing to travel to the distant dwelling place of the Dalai HaHa of Comedy, a rough-hewn mountain man known as Shecky.

"Know this, my master," said Shecky, "that many seek the path to the Dalai HaHa, but only a few survive the journey. However, remember also that a journey of a thousand miles begins with just a few steps."

Shecky and I set out on dog sled traveling through blinding snowstorms with temperatures well below zero. At night we would keep ourselves warm by setting fire to each other and comfort ourselves with thoughts of a better life being torn apart by packs of crazed wolves. After weeks of arduous travel we arrived at the place shrouded in mystery, veiled in secrecy, and wedged somewhere between the sofa cushions.

"It is here I must leave you," said Shecky.

"You mean because it is only fitting I complete the pilgrimage to the Dalai HaHa of Comedy alone?"

"No, because I haven't gone to the bathroom in six weeks."

Before me lay a Golden Temple with huge intricately carved oaken doors.  That actually turned out to be Applebee’s, but next to it was a tiny hovel with a sign that read "The Dalai HaHa of Comedy -  Grand Master of the Comedic Arts. One Flight Up."

A bearded gentleman in white robes sat on small divan.  Around him were fresh flowers and the aroma of sweet incense.

"Oh, illustrious Dalai HaHa of Company:  Why are some comedians funny and others are Bob Saget? Who do you like better, Amy Shumer or Louis C.K.?; tell me why in 25 words or less and make sure at least 8 or 9 of them are dirty.  Will there be another season of Curb or can I drop HBO?  I never want to accidentally be subjected to 2 or 3 minutes of The Comeback ever again!

And finally, oh illustrious Dalai HaHa, I long to know....

"What is the Secret to Perfect Comedy?"

The illustrious Dalai HaHa of Comedy closed his eyes and began chanting in some strange tongue unknown to me. I think it was his own tongue, which makes sense. After what seemed to be at least six or seven hours, he opened his eyes and stared straight at me as if he'd known me all his life.  Then he spoke.

"Pie is the Secret to Perfect Comedy?"

"Not quite, my son.  In time you may be ready for seltzer."

"Tell me, oh illustrious  Dalai HaHa of Comedy, is "pie" the same advice you imparted to another who made the quest here to the place shrouded in mystery, veiled in secrecy, and wedged somewhere between the sofa cushions, a man named Monroe Firth?

"Monroe Firth did not ever arrive."

"Didn't arrive!  My God!  Do you know what happened to him?"

"He texted me something about Myrtle Beach."

My, the Dalai Haha is a handsome devil. Sort of reminds me of myself a couple of years back before I started coloring my hair silver.

Sometime, I'll have to tell you about my trip to see Dalai Hohum who claimed the Secret of Perfect Comedy was roadkill. It doesn't work everywhere, but is pretty effect in the South.

Having failed with the Dalai HaHa I'm thrilled to try the Dalai Hohum, Salvadore Dali, Hello Dolly, Dolly Madison, or even the Dalai Lama himself to improve my comedy. Or should I just go to the Grand Master Gayer?


I was surfing the Internet searching for solution. then I saw a testimony on how to get cured from Herpes Disease by a herbal doctor name Robinson buckler. I quickly contacted him for help, i purchased his herbal medicine for herpes virus, i took with the instruction i was giving. I was cured from herpes virus just in 2 weeks with This effective herbal Medicine. I am now free from the Virus, contact him robinsonbuckler@yahoo.com…………

He can also help you with your own problem today..there is no harm in trying. he will surely cure you.

(He has solution to all health issues)…

#Do you want to get pregnant?

#Do you have erectile issue?

#Do you have Prostate cancer?

#Do you have Fibroid?