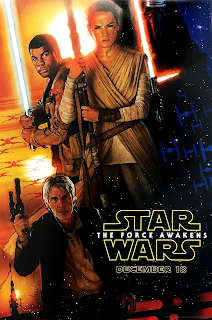 I don't go to the movies much anymore, but my son Brandon was back from study abroad in Amsterdam and home on winter break, so we decided to go see Star Wars: The Force Awakens.

"That will be two adults for the Star Wars movie," I said.

"Two adults?" said the young woman behind the counter quizzically.

"I know what you're thinking," I replied. "But my son is in college so I believe he is over the age for the child rate."

"Sir, your son is over the age for the child rate in human years, dog years, and light years. What I mean is, it's one adult and one senior!"

Damn that accursed word "senior!"  I've avoided it as long as I could, but now that I'm 65 I qualify for the senior discount in even the most johnny-come-lately-to-give-a-senior discount establishments. Some of them start as early as 55, some at 62, but nobody later than 65.

There's just no escaping it now. I've sunk to senior status even at my friendly neighborhood movie house!

I accepted my discount, we entered the theater and settled into our seats, and the movie began. And no sooner had I read


"A long time ago in a galaxy far far away"

than I heard a voice anything but far, far away whispering at my side.

"Excuse me, sir, would you like something from the snack bar?"

"Well, yes, I was going to get some popcorn in a little while."

"No need for that sir. This is a special service for seniors. I can also take you to the bathroom when you're ready and wait for you in the adjoining stall."

"I know that, sir, but you may want to conserve energy for checkers tomorrow."

"Are you sure you want a coke?  We serve warm buttermilk now."

Two hours passed.  The First Order and the Republic were locked in fierce and furious space-born battle,  and  I learned I really hate warm buttermilk.

Again there was a voice at my side.

"Sir, this movie gets kind of violent the rest of the way. Would you like to go in the lobby, I'll tell you the ending, and our senior shuttle can take you home?"

"Why ... why ... why," I barked hoarsely, "do you know that two major actors in this movie are so-called seniors and another one is close behind, and that's not counting Max von Sydow?!"

"Well, you don't see them watching the movie, do you?"

You know that kind of made sense. And to be honest, although I like Star Wars I think seven of these movies may be three or four too many. The shuttle turned out to be kind of comfortable, and the ending wasn't half bad as recited dramatically to me by 17 year old Rodney Thistle from Broomall PA.

As a senior, maybe the Force is no longer with me.

But I'll sure be pumped for checkers tomorrow!

So, after years of throwing a hissy fit every time someone mentioned the "S" word, you're finally accepting it. I never thought you'd sell out so cheap or so easily. You've always set the bar pretty low, but warm buttermilk represents a new rock bottom. Next you'll be wearing your pants pulled up under your armpits.

What time will you have the checkerboard set up? I want to be red this time.

I haven't accepted it. I've accepted it as much as I took a shuttle home from the movie and actually drank warm buttermilk (okay, maybe I drank the buttermilk). And my pants would be pulled all the way up if only I could keep them from falling to my ankles from shrinking in recent years.

As for checkers, what time can you be here? Because I'm calling red right now!

Perry, Perry, Perry.....I can hardly believe my eyes. You let a 17 yr. old bully you out of seeing the ending of Star Wars. Mercy me. And for warm buttermilk? Tsk. Tsk. You should know by now that buttermilk is good for one thing: cornbread. I didn't see that you mentioned cornbread.

But the Comedy Force will ALWAYS be with you, Perry.

Cornbread I like but maybe with coffee, not buttermilk. Don't laugh, that special senior service may be coming soon to a theater near you. And they're relentless!

Roz, thanks as always for your support. May neither of us ever go over to the dark side.


I was surfing the Internet searching for solution. then I saw a testimony on how to get cured from Herpes Disease by a herbal doctor name Robinson buckler. I quickly contacted him for help, i purchased his herbal medicine for herpes virus, i took with the instruction i was giving. I was cured from herpes virus just in 2 weeks with This effective herbal Medicine. I am now free from the Virus, contact him robinsonbuckler@yahoo.com…………

He can also help you with your own problem today..there is no harm in trying. he will surely cure you.

(He has solution to all health issues)…

#Do you want to get pregnant?

#Do you have erectile issue?

#Do you have Prostate cancer?

#Do you have Fibroid?