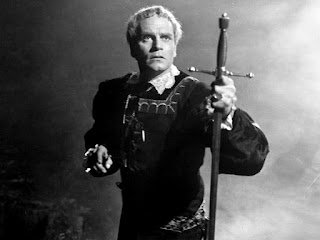 To Be or Not To Be.
I should only get a question like that on the final!

Hamlet:  No, I mean what are thou doing in this play altogether? Last time I checked thou wast a third rate humor writer in Philadelphia.  I wouldst have said fourth rate but I believe the scale tops out at three.

Perry:  Aye, Hamlet, at three.  This play is like Rosencrantz & Guildenstern are Dead, Hamlet, in which relatively minor characters in Hamlet are given enhanced roles.

Hamlet: To be, or not to be: that is the question.

Perry: And you've got a 50% chance of getting it right too!

Hamlet:Whether 'tis nobler in the mind to suffer
The slings and arrows of outrageous fortune,
Or to take arms against a sea of troubles,
And by opposing end them?

Perry:  Slings and arrows? Take arms? Are we talking a gladiator flick here? You got Netflix in the castle?

Hamlet: To die: to sleep
No more; and by a sleep to say we end
The heart-ache and the thousand natural shocks
That flesh is heir to.

Perry:  A thousand natural shocks to the flesh?  That's how you get to sleep? Why don't you try Lunesta?

Hamlet: To sleep, perchance to dream!

Perry: To stay up, perchance to snack!

Perry: Well, doesn't it kind of depend who's doing the rubbing?

Hamlet: For in that sleep of death what dreams may come
When we have shuffled off this mortal coil,

Perry: Now wait a minute!  I'll shuffle off to Buffalo, but shuffling off this mortal coil is a bit more shuffling than I've got in mind!

Hamlet:  Perry, you're not helping!

Perry:  It's not my fault!  My part's poorly written.

Hamlet: What's your function in this play anyway?

Perry:  I'm here to help you make up your mind whether to kill your uncle or take your inheritance and go off to found Ft. Lauderdale.

Hamlet:  OMG, you teaching decisiveness is like Donald Trump giving a seminar in humility!

Hamlet: Oh that this too solid flesh would melt.
Thaw and resolve itself into a dew.

Perry:  Melting flesh?  Like in Raiders of the Lost Ark when that Nazi's face melts in the final scene?  Awesome!

Hamlet: No, no, no!  My mother married my uncle one month after my father was killed. And my father was so excellent a king, compared to my uncle he was like Hyperion to a satyr.

Perry: A Seder?  Hey, are you guys Jewish in Denmark?

Hamlet: And yet, within a month!


Perry: Actually it wasn't just any month.  It was February to boot.

Hamlet:  Let me not think on't.  Frailty, thy name is woman!

Perry: Hamlet, watch the sexism!  And take down that confederate flag!

Hamlet:  O, God!  A beast that wants discourse of reason
Would have mourn'd longer!

Hamlet: Married with my uncle,
My father's brother, but no more like my father
Than I to Hercules!

Perry:  Actually he was probably a good bit more like your father than you are to Hercules, it being you couldn't bench press Jared Leto!

Hamlet: She married. O, most wicked speed, to post

With such dexterity to incestuous sheets!

Hamlet:  Perry!  You're still not helping!

Perry: Okay, Hamlet, here's an idea.  Stage a play and throw in a few scenes that show what your uncle did to your dad. See if that upsets the usurper.

Hamlet:  The play's the thing in which I'll catch the conscience of the king! We'll probably open off-Broadway.

Perry:  What play you going to put on, Hamlet?

Clever take on the Rosencrantz & Gildenstern angle. And all this time I thought Hamlet was the diced up meat in a Denver Omelet. Thou art quite talented at quoting Snakeshit, . . . er, I mean Shakespeare. I can't wait to attend your seminar on indecision, as soon as you decide when and where to hold it.

I've decided where and when to hold it, I just can't decide if I should let anybody come. I also noticed I forgot to include R & G in the play since they're in the title, but judging from the response I don't think any rewrites are likely to happen. Or maybe they will, I can't decide about that now. But I am gonna kill Hamlet's uncle!

Great play on Hamlet! Keep up the funny!

Sorry for spelling errors, my smart phone isn't being very smart at the moment!

Thank you, Gary. I knew someone of your refinement and culture would be all over Hamlet! I wish I'd at least read the Cliff's Notes.

Thank you. I'm working on another post that should be out late fall 2016.

Really, Penny, no spelling errors came through at all except for my mangling of Shakespeare. Thanks for checking in.

The Tweeter and Blog piece was at once hilarious and stunningly beautiful.

Go on, make a witty retort. I know you want to.

(Thanks for sharing your amazing stuff.)

I love that piece too. I made a moderate attempt to have it professionally published (that's why I had the art done by a professional artist) but couldn't generate any interest. It's one of my few pieces that has a bit of a morale and a deeper humanity, and sometimes I almost tear up a bit when I read the end. Thanks, Eve.