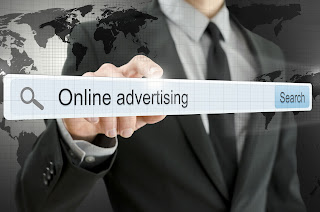 Online Advertising?  I wonder what that's all about.
Hey, nice suit!

It was plain as the nose on my face, which by all accounts is way more than exceedingly plain. My navy blue sport coat which I'd owned for many years had developed a moth hole in the left shoulder of such magnitude it seemed as if the moth had seized upon the sport coat first thing following sundown on Yom Kippur.

Yep, my sports jacket needed replacement, and so I looked online to the site of a well-known and respected men's clothing store in my area known as Joseph R. Blank.  And indeed, Joseph R. Blank was having a sale on sport coats, with selected jackets as low as $50 as long as you also bought a matching pair of suspenders with special design resembling emojis having sex.

I went to Joseph R. Blank that very day and did secure a nice blue sport coat which fit me well and even complimented the nose on my face. Mission one and done.  I thought.

Later that day I went on Facebook, and there in the right hand column was an ad for Joseph R. Blank.  "What a coincidence,” I thought.

"NECKTIE SALE AT JOSEPH R. BLANK!  Three neckties for $10 provided one is striped, one has a stain, and the third frankly doesn't suit you!"

Amazing!  Oh, well, I wanted to check something on Wikipedia, and so I clicked out of Facebook and over to the America's favorite free encyclopedia.

"And so, Hitler marched into the Sudetenland and there he found ...."

"70% OFF SALE AT JOSEPH R. BLANK!   Suits, Sport Coats, Pants, Shirts, Any Other Article of Clothing that Might Yet be Invented!"

I clicked over to a site called "Who Unfollowed Me On Twitter," which shows you what crass & unfeeling tweeps have cut you loose lately.  There I discovered that, unlike the twitterers listed on the site, apparently following me for life was ....

"JOSEPH R. BLANK! SALE ON SUITS!  Buy one men's suit for regular price, get another for only one pint of blood!"

In the days and weeks that followed, Joseph R. Blank followed me like Mary's Little Lamb.  It was no coincidence:  I was being targeted, stalked. Who was this Joseph R. Blank?  What did he really know about me?

"Dear Overage Balding Boomer," the email began." While there's only so much that clothing can do for the likes of you, THERE'S A SALE ON SOCKS AT JOSEPH R. BLANK!"

Now the Joseph R. Blank ads appeared anywhere and everywhere.  On YouTube, on my desktop, on my screensaver, in pornography, in the sky above, in my breakfast cereal, on the faces of people on the street, in my fitful tortured dreams!

“WAKE UP, PERRY! JOSEPH R. BLANK is having a sale on polo shirts! Buy three polo shirts and get a free polo pony!

The internet has majorly changed marketing as we know it. It used to be we could turn off television commercials and/or decline to read the ads in newspapers and magazines, but now advertising tracks us down like Colombo. The only hope is that this strategy will ultimately backfire, advertisers will get the message, and finally we'll get some relief.


Or better yet I'll tell you in person at your store this afternoon.  Those sexy emoji suspender ads are really starting to appeal to me!

(The name of the actual establishment referenced in the piece above has been slightly changed to protect the guilty.)

And I'd like to welcome four new followers to the blog: Eve Gaal @EveGaal, Kate Konigisor @KateKonigisor, Deb Stewart @DeborahStewart, and Ilil Arbell @ILILARBEL. Thank You, Guys! The usual riches and emoluments to follow.

You need Adblock. It works great!

Yeah, but then I wouldn't have this good material. Thanks for joining, Eve.

There's just one thing that's bothering me, ...okay, make that TWO things. One thing is the overwhelming number of Joseph R. Blanks ads that popped up when I came to your blog, and number two, why you didn't wrangle this into a spokesperson opportunity.

I can see the headline now, "Block Shops at Blanks," or if you get fed up with them, "Block Fires Blanks." (sounds like a vasectomy story doesn't it).

LOL, but I'll leave the vasectomy stories to you and your young Japanese doctor. I'm told if I delete the cookies Joseph R. Blank will blank out, but frankly I may be hungry later.
Yep, I hated that joke too.

I always enjoy your humor. Thanks for the giggle.😀

You're welcome! Why not join the blog by clicking on "Join this Site?" Membership Card and Special Decoder Ring to follow!