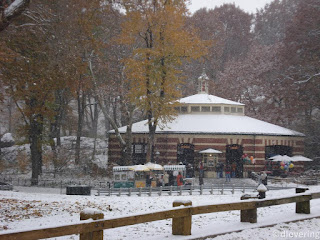 
Farnum wasn't much of a writer but he loved to write stories about a young man named Sylvan and the Christmases Sylvan enjoyed from years gone by.

Farnum himself was a rather minor character in a book written by a novelist named Giorgio.  Giorgio for his sake had been created by Cinnamon Klein, a New York City pulp fiction writer and amateur detective.

"And so ends another Cinnamon Klein Mystery,” I typed, closing
the laptop.

"Merry Christmas, Perry!  This is Sylvan."


"Well, I guess Farnum is a lot better writer than you, Cinnamon, or Giorgio ever gave him credit for, isn't he?”

To be honest, I really can't figure out this goofy post came out of a Christmas prompt. I think the circular nature of the building got me thinking about layers of stories and how many "levels" away from the author a character in a story within a story might be.

To review:  Farnum created Sylvan, Giorgio created Farnum, Cinnamon Klein created Giorgio, I created Cinnamon Klein, and Russell created me.  There you have it.  And if you click here, you'll also have the takes of the other Friday Fictioneers on the picture prompt above, created just for you.

And should any of you happen to see Cinnamon Klein, please tell I created her, it's not fair she won't return my calls!

Perry, there is an Inception-meets-Stranger Than Fiction feel about this. It'd be strange enough to meet one of my creations, let alone one created by a creation of a creation. What a mind bender. :)

Don't wanna brag but I taught Christopher Nolan everything he knows. And I gave him that voice for Batman too!

Oh my...to be inside that head of yours! lol

Like David, I immediately thought of Stranger than Fiction. I often wonder what my characters would say to me if they were suddenly to materialize. I don't think it would be nice.

This is like a Twilight Zone story, Perry. I don't know if I want to get involved with this as I might be pulled in and find out some writer in LA or NYC created me. I'm sure you understand. Well done as usual, though confusing. :D --- Suzanne

Came to read here after the Circular Reference error in my Excel sheet bugged me for the entire day! Guess its hell bent to follow me everywhere I run! :)

Sorry, there isn't enough room in here for me.

Yes, but I'll bet very few of them would sue you.

You think YOU'RE confused ...

Guess what I have in store for you when you go to sleep tonight!

Whoa! This one made me dizzy! Good job.

Not to brag, but I think this is the best piece one of my creations ever wrote. If it circled any tighter readers would be sucked through a vortex and into a black hole somewhere in the Humor Dimension.

Loved the names Cinnamon Klein and Farnum. Sylvan and Giorgio sound like a couple of perfume makers.

I think this one deserves a long story, Perry. It's funny, as always, but also multi-layered and fascinating. Plus, you got all those great names. They're all just begging for attention from you. I like this a lot.

There a terrible logic to this Perry. Some writers deserve to be visited by their characters.
Clever idea, well executed.

Funny and spooky at the same time. Well done.

I love it, it's brilliant. I'm afraid most of our fictional characters would run with torches and pitchforks after us if we ever met them.

My brain was getting twisted in a knot re-reading this, until I went below the story and discovered I wasn't crazy after all! Nice story!! :)

Perry, I actually understood better before your explanation! ;) Well, maybe I didn't. Anyway, my brain is freezing up and maybe that's the connection to the photo! ;)

I'm not sure it was a good job if it made you dizzy. Hopefully dizzy is as bad as it got!

Well, if you had done a better job in creating me I would have been able to make up all four names that you'd like!

Thanks, Amy. I would like to write more about this story later on, but for now I think I'm just going to focus on Cinnamon Klein and getting her to return my calls.

Thanks. Unfortunately I don't think these characters deserve to have to be stuck visiting me.

Thanks, Sandra. Yes, I have been called spooky at times. Funny, not so much.

Thank you for comparing me to Leonardo diCaprio. Everybody does.

Perhaps. Most of mine refuse to even acknowledge me, let alone chase me.

I'm pretty sure just the fact that you stopped to read the story indicates you probably are crazy after all.

That's exactly the connection, Lorna, you brain is fine. Now how do I unfreeze my own?

Fun stuff! I was getting Dizzy there!

Did you just wake up the day of The Photo Prompt and think, 'Today I shall write a Chinese Puzzle," or is this the way our mind always works?

You were getting dizzy? Nothing delectable you ate, I hope.

Kind of depends who I was created by that day. Not sure it was Russell's day.

Thank you. Now explain it to me please!

What an excellent story, The Twilight Zone meets Steven King, with the twist of Pery.