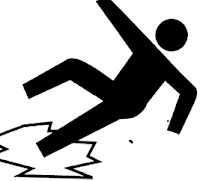 I finally got around to replacing my old laptop, and it was certainly more than time.

Manufactured during the Truman Administration, it came with a screen saver featuring Lassie and Timmy, kept flashing the error message "what is this internet anyway?" and froze up more frequently than my last girlfriend. Finally it gave out once and for all, emitting a horrid stench as if a skunk had curled up and died inside of it, which is I think pretty much what actually happened.

So the next day I went to my local computer store and purchased me a gleaming new HP Corei5.  It was sleek and powerful, the ultimate technological tool to render my humor so witty and razor sharp as to induce riotous laughter even in individuals as totally devoid of a sense of humor as the writers of HBO's The Brink.

But I had not reckoned on PC Calamity Times Three.

As anyone on the Internet knows, coffee is the beloved patron saint of all writers. Coffee heightens alertness, unleashes the creative spirit, and propels you to the most wonderful time you can ever hope to have in the bathroom without anyone else being present.

So with my 16 ounce cup of Wawa java by my side, I was fast and furiously knocking out my latest comedic gem when an errant hand gesture smacked the coffee cup and sent its steaming contents sailing through the air onto the keyboard of my brand new computer.  When the tirade of epithets was over, I began to type once more but some of the letters stubbornly refused to appear.

I struggled to type out a sentence that materialized as if it were a puzzle from Wheel of Fortune several turns away from being solved. Unless I could figure out how to write every document from now to the end of my existence on the planet without use the letters "t, w, d, v, and b," professional intervention would be in order.

About a week after I plunked down $200 for a new keyboard, I found myself trying to access a website that simply would not download. I googled a possible fix for it and fortunately quickly found a site called "Handy Fixes for Sites that Don't Download for Naive Morons."

"Great," I said aloud, "I've solved this problem like a champ!"

Among other things, the malware I'd downloaded kept urging to me to buy a shipment of iguanas from New Guinea.

The malware removed to the tune of $200, I was in a hurry one day to get to a crucial meeting about "nothing important at all" when my foot caught on a cracked and raised section of sidewalk.

Like the contents of a steaming hot cup of java smacked by an errant hand, I went sailing through the air onto my rear end and onto a nearby plot of grass graced by a nearby pile of dog doo-doo.

I was unhurt, but my PC screen now appeared half a dozen shades darker than it was supposed to be, creating an ominous forbidding atmosphere as if any minute a tornado was about to begin swirling across my latest blog post about Dracula done as a modern epistolary novel, which no one would read anyway.

And that's my little tale about my PC Calamity Times Three.  Yes, I need to learn how to be more careful with such sensitive and important equipment as my new HP Corei5, but I can take comfort in the knowledge that bad things come in threes. So, as we all know, nothing more can possibly.....

This is why I try not to buy new electronics until absolutely necessary.

It's true. And I miss Lassie and Timmy.

Perry, I sense that you are the kind of guy who could tear up an anvil.
When someone suggested you surf the web, you chased down a spider named Charlotte and attempted to ride your board across her home. Thankfully, the restraining order went through in time to stop you.
I sympathize with the malware issue. That happens alot, alot, alot, alot, . . .

I am the kind of guy who could have an anvil fall on his head and have a flattened head for a second or two until I shake it off and go back to chasing the Road Runner. The interesting thing about this story (if there is one) is that it is actually true. I did screw up my new PC three different ways before it was six months old. My job now is to get it through to its Bar Mitzvah unscathed.

Apparently, LifeProof needs to go into the PC business, and you need to be in line to purchase the first one!

Perry, you should see if you can purchase a plastic cover you can type through. I understand they're available for some tablets. It would be a bit like the plastic couch covers some people nover took off. You might want to buy a couple as dog doo probably leaves an odor on plastic.Hilarious as usual. :D --- Suzanne

Thanks, Dawn. I wish it were just a line!

And as I said, except for an added flourish or two, this piece is 100% accurate. Yes, I am that much of an idiot!

Clear plastic slipcovers. Yep, that's how cool a guy I am. Think I'll get them for my furniture too while I'm at it. Thanks, Suzanne!