DATELINE L.A. FOR
PEOPLE COOLER THAN YOU 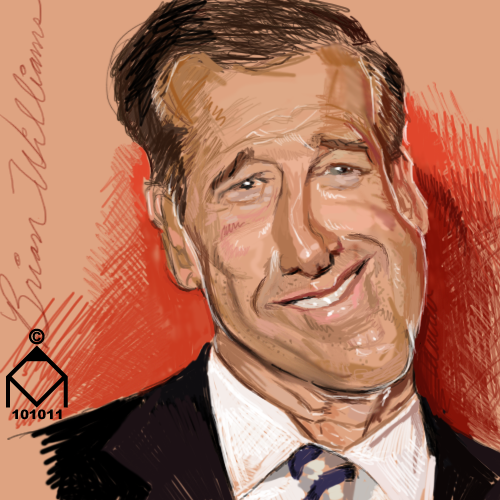 A Shocking Lack of Credibility!

June 14, 2015 ....  Dateline L.A. for People Cooler than You has learned that NBC has completed a comprehensive investigation regarding  former NBC Nightly News Anchor Brian Williams which has proven categorically that Mr. Williams has "misremembered" far more about his past than the incident in which he claimed to have been riding in a helicopter under fire in Iraq.

The NBC Investigation has revealed a staggering number of additional events Mr. Williams has "misremembered" including:


The key finding of the NBC Investigation is that at the very time as all these actual and fully verified events were taking place, Mr. Williams was stating to others that he had been shopping for dental picks at Walmart!

Based upon the investigation, President of NBC News Deborah Turness has stated that "Mr. Williams' shocking lack of credibility in claiming to be in Walmart while actually performing world-class heroic feats is certainly cause for immediate termination, but I have decided instead to reassign him to the position of announcer on the Jimmy Fallon Show, where night after night he will have to pretend that Mr. Fallon is funny."

Dateline L.A. for People Cooler than You thinks this is apt punishment indeed for this phony baloney!  And BTW, Brian, ummm, you got any numbers left over from that time in Vegas?

You may be able to lie about somethings and get away with it, but there are too many witnesses at Walmart. If had indeed been there, someone would have posted a photo of him with his hot-pink hair, bright green tutu, and fishnet hose on "The People of Walmart" website.

Plus his extremely poor dental hygiene. How could he expect us to believe he was shopping for dental paraphenalia with all those books about the technology and science of time travel in his desk at NBC and those pictures of him with Winston Churchill? What a liar! Fire his ass!