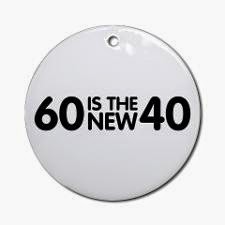 Over the course of the past several years, I've humbly put together several lists the purpose of which is to demonstrate that unlike most Boomers would like to believe,  60 is not the new 40. The most comprehensive of these lists appears in the Huffington Post dated October 1, 2014 entitled (inaccurately) 60 Signs You're Way Past Middle Age.

Here's another 30 reasons that 60 is not the new 40 to add to the official cannon:

1) Regardless of whether he or she likes the song Happy, somebody who is 60 thinks Pharrell Williams' hat is stupid.

2) During the years he or she was growing up, somebody who is 40 had heavily impressed upon him or her the critical importance of flossing your teeth, not just brushing. You still don't floss.

3) Somebody who is 60 grew up thinking it was cool that "Davy Crockett kilt him a bar (bear) when he was only three" instead of appalling and disgusting as somebody who is 40 clearly would have.

5) Somebody who is 60 watched My Mother the Car.

8) Somebody who is 40 might watch The Bachelor, although I hope not.

10) Somebody who is 40 would have no way of distinguishing between Jerry Mahoney and Knucklehead Smith.

11) Somebody who is 60 knows precisely how Hertz put you in the driver's seat.

12) Somebody who is 40 does not think Father Knows Best is a television show starring actor Robert Young that somebody who is 60 used to watch long ago but one of the most sexist statements he or she has ever heard in their lives!

15)"From out of the blue of the western sky comes Sky King!"  Was Sky King the airplane or the pilot in this 50's TV show?  A breeze for somebody who is 60.

16) Somebody who is 40 grew up with Sesame Street.

18) Somebody who is 60 gets Beck and Jeff Beck mixed up. (You don't, fellow Boomers? I always think Beck means Jeff Beck.)

19) Somebody who is 60 remembers a time before there was a Super Bowl.

20) Somebody who is 40 doesn't particularly give a crap that James Taylor is bald.

21)Somebody who is 60 remembers the TV spot featuring a hipper-than-hip Robert Lamm of the super group Chicago singing an anti-drug song while his hotter-than-hot girlfriend admiringly gazed at him, while somebody who is 40 wonders why anyone would pay the slightest attention to an anti-drug song by a middling keyboardist from an ancient band that did Saturday in the Park and Does Anybody Know What Time It Is? and a bunch of other songs their Dad likes.

22) When somebody who is 40 gazes into their bathroom mirror, they do not cry out "OMG,  this mirrors on the fritz; I've got to get it into the shop for repairs!"

23) When someone mentions the word "turkey" and it isn't Thanksgiving, somebody who is 40 does not immediately begin rapidly hitting their neck with the back of their hand in a vain attempt to smooth it out.

27) Unlike somebody who is 40 would have, somebody who is 60 didn't blink an eye at the lyrics to the theme to Green Acres "You are my wife!" "Goodbye City Life!" as Eddie Albert yanked Eva Gabor to the country life against her will.

28) Somebody who is 40 thinks J. Fred Muggs was Chairman of the Securities and Exchange Commission in 1957.

29) "Hold it, I think you're going to like this picture" --- Somebody who is 40 does not recognize this tag line, have any idea what television show it belonged to, and/or know that Ann B. Davis was a regular in a TV show before The Brady Bunch.  (Actually somebody who is 60 may not either!)

30) Somebody who is 60 never talks about memes.

This one hit in a number of vulnerable, yet hard to reach areas. Still, though, My Mother the Car rocked.

And I passed the Catcha test! I'm not a robot! (now I'm going to pass again)

Norm, does my comments section have CATCHA? I don't want it. I thought it was shut off.

I always loved it ... wait a minute, it sucked! As addicted to TV in those days as I was, even I didn't watch My Mother the Car. I liked "Love that Bob" for all the women I dreamed I'd one day get but didn't. Thanks, Norm!

This is a great blog! Keep up the good work! Who is Beck anyway?

Beats hell out of me, I'm a Boomer!

I think J. Fred Muggs should be appointed chairman of the Federal Reserve. That position has been lacking in dignity and class for sometime now.
As I am on 59 and 4 months, I don't get the whole 60 is the new 40 thing. Probably because I'm still celebrating the 20th anniversary of my 39th birthday 4 months later.
It's good to be young. You should try it sometime, Perry.

Suddenly 4 months from now you will begin laughing hysterically as you suddenly get each joke. Be ready not to operate heavy machinery or make any major decisions when that happens. I'll have J. Fred Muggs call you to discuss.

As a nouveau 40-year-old, I'd like to address some of these points:
Yes, James Taylor has been bald as long as I've been conscious of him.
My generation remembers Chicago as the band who sound-tracked the Karate Kid.
Can't Stand Pharrell Williams. I think you have to 14 to get him.
You got me on the British invasion. I would have guessed Stones and Beatles and maybe Spinal Tap.
I assumed Beck's first name was Jeff.
You nailed the "hydrated" thing and just about everything else.
One possible addition I could offer came from my grandfather: "When I was a kid there was no such thing as food that wasn't good for you. Ya either ate or went hungry." This from the guy who ate lard sandwiches, whole eggs and real butter and somehow lived to 87.
Anyway, great list. Made me laugh.

We are all 35 inside. How to get the outside to match up with that is the problem!