The Ides Have It 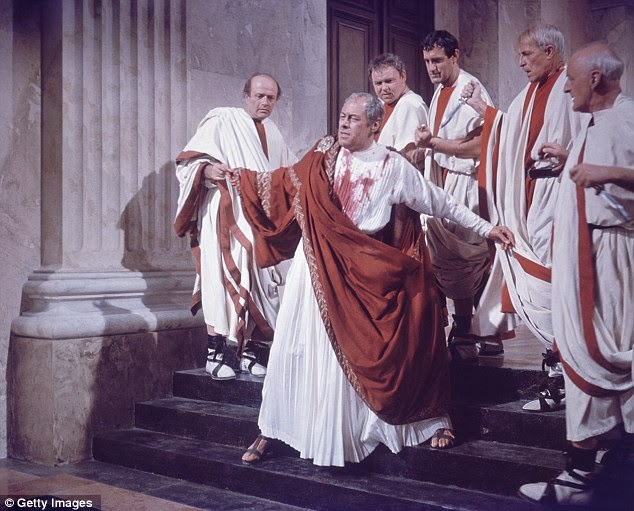 Well, this has been a terrible day!


The Ides Have It
from Julius Caesar
Act III, Scene 1
(a/k/a The Gory Part)

(A crowd of people are on the stage, among them the Soothsayer.  Enter Caesar on his way to the Capitol. Brutus, Cassius, Casca, Decius, Cinna, and other conspirators are already at the Capitol awaiting Caesar.)

Caesar:  Ah, you are the soothsayer who didst tell me previously to "Beware the Ides of March," are you not?

Soothsayer:  Aye, Caesar, you have a memory for grimy and misshapen faces like mine, I'll say that much.

Caesar: Well, looks like I'm in the clear now, grimy and misshapen! The Ides of March are come.

Soothsayer:  Aye, Caesar, but not gone!

Caesar: Maybe I'll take the scenic route today to the Capitol .... by way of Carthage!

Cassius:  (calling from the Capitol) Caesar, hurry up, we're waiting for you! We've got a murderous schedule today.

Caesar:  Another wonderful word choice!  Just a minute, Cassius; say, why don't you grab some coffee and a doughnut first? You have a lean and hungry look today.

Brutus:  Hurry up, Mighty Caesar, we have an important vote scheduled on Octaviuscare.

Brutus:  The vote has got to be today, Caesar. Gaius Cruzus doth oppose us.

Caesar:  How much time have I used up, Soothsayer?  Five or six hours?

Caesar: Oww!! Owww!!! There's a pebble in my sandal the size of the Rock of Gibraltar!  I can't go to work today.

Soothsayer:  No, that's just the size of a very small pea, Caesar.

Caesar:  You're helping me, right, Soothsayer?

Cassius:  All of us will come down and carry you to the Capitol, Caesar!

Caesar:  No thanks, fellas! I get nauseous when being carried by a pack of guys, especially if I'm riding on the two or three guys carrying me in the back seat.

Caesar:  No, no, no,  guys! Think I'll go to the hospital, they'll probably want to keep me overnight for observation, my foot is swelling like the word count in a Shakespeare play.

Soothsayer:  They raiseth you aloft, Caesar!

Caesar:  Yeah, and I'm already nauseous.  How's all this going to work out f or me, Soothsayer?

Soothsayer:  Let me put it this way: it's going to makes Tarantino look like Disney.

Caesar: Farewell, good Soothsayer! Cowards die many times before their deaths, the valiant never taste of death but once.

Caesar: Thank you. The  problem is that I'm about as valiant as the guy who surrenders to the French Army the day before the war begins.

Caesar:  Okay, just take a little off the top but leave the internal organs long.

Caesar: Casca, does that mean you've taken up signing?

(Brutus, Cassius, Decius, Cinna, Casca and other conspirators move in with daggers drawn.)

Caesar: Nope.  Looks like I'm wrong about that one.

Soothsayer:  Caesar, do you have any messages you'd like me to convey before you're turned into chopped chicken liver?

Caesar: Yes, Soothsayer.  Tell Shakespeare I hope he at least gets a hit out of it.

At last! Caesar finally gets the point!

Yes, but he is still a cut above! Thank you, Glynn.

Well, at least they didn't make Caesar a eunuch. I think it was going to be in the film version, but wound up on the cutting room floor.

Ouch! I think that line hurt me as much visualizing it did!

See your email - the link from your blogger site goes to some acne cream add or Ukraine perhaps. Will send money to get you released after you were robbed.

Hi, Caroline - No, I changed my blog site to www.perryblock.com so my name would become more famous and it's working out just so swimmingly well. Whoever took over nouveauold is welcome to it. Actually their site looks pretty good so nouveauold now has a good home and will probably forget all about me soon. So no need to send money to get me released, but you could still send money. Thanks for being so vigilant, just like Radnor!