My Dinner with Dick (Nixon) 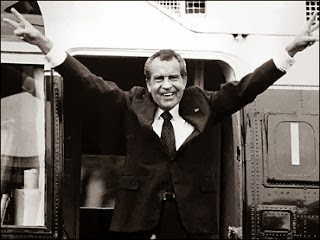 He was this close!
Minus the hand gesture and the helicopter

This is a story about me and Dick.

No, it has nothing to do with sex.  Not directly anyway.

It is rather a story about me and former President of the United States Richard M. Nixon and the evening we had dinner together at a restaurant in Philadelphia in the mid 198o's. Those of you who regularly watch Fox News can stop salivating.  I didn't get to meet the man, share ripostes, or lovingly wipe his chin of butter sauce, although I was close enough to profoundly admire his bridgework.

I am somewhat of an autograph hound.  That is, I am interested in celebrities (at least those born before 1970) and possessed of a keen desire to feel in some way connected to them. Unfortunately I am not overly blessed with THE GUTS TO APPROACH THEM!  And therein lies the tale.


"That's Richard Nixon!" said my date Elise as a familiar foursome walked into the restaurant in which we were seated in the midst of our second date that evening.  Looking up, I recognized the former President of the United States, his wife Pat, his daughter Julie, and her husband David Eisenhower being led to a table not 15 feet from us.

"No, no, no, no!" I shot back. "He's a crook and cheat and we don't want or need his autograph!" I said firmly, lying my ass off --- not about Mr. Nixon ---but about my reason for keeping said ass planted securely in my restaurant seat.

"Perry,  he is a major world leader of the twentieth century!"

"Ellen, he's probably surrounded by secret service men. We'll be grabbed and whisked away for exhaustive interrogation by two sadistic cops straight out of central casting!  Trust me, they won't let anyone get near him!"

Now I've used this excuse many times before, including the time I failed to pursue the autograph of Rupert G, the guy who runs the deli next to The David Letterman Show. But it seemed to quiet down Elise, who thereupon settled into her French Onion Soup and our dinner conversation, the former hopefully a bit warmer than the latter.

An hour and a half later as we received the check and Mr. Nixon and his entourage rose to leave, two sweet little blond girls, about four and six years old respectively, ran up to the former President and asked for his autograph.

They were not grabbed.

They were not whisked away for exhaustive interrogation by two sadistic cops straight out of central casting.

Mr. Nixon flashed his jowly smile so broadly it appeared he was about to shoot his arms into the air and make the patented victory sign so often dispensed during his Presidency.  He seemed truly delighted, almost as if he now felt vindicated at long last in the eyes of history, his fellow man, and the two little girls, for whom he graciously signed autographs. They beamed with happiness.

My dinner date was not beaming so happily.

"That's not the only opportunity you've squandered here, buster!" she said.

And that's the story about my dinner with Dick.  And though I didn't actually get to meet the 37th President of the United States,  I do have this to say about him:

On that particular evening, you really were a crook!

Hi Perry,
I was wondering if I could get your autograph. I've never known anyone who got close enough to a U.S. President to smell the hubris. If this is too much trouble, maybe you could get Ellen to give me an autograph . . . and number. I wouldn't grieve too much over the date ending the way it did. Onion soup breath is hideous. Ron

And it is especially hideous for me who hates cheese! Yes, I can see why you would want my autograph, Ron; I was literally close enough to Mr. Nixon to lick his five o' clock shadow, but of course, too shy to do so! Thanks for writing.

Perry… Six Degrees from Richard Nixon? Very cool. So where does that put Kevin Bacon?

I'm not sure, but I checked my genealogy. I'm such a loser it turns out I'm seven degrees from Kevin Bacon.

I'd say having two dates with Ellen in one evening was even a greater accomplishment than seeing Tricky Dick eye to jowls. Poor Dick was any more crooked than those before or after him, he just got caught. And what about those tapes? Why didn't he just record himself singing in the shower.

Yes, I understand Mr. Nixon did have a date with Ellen later that evening and the ex-President emerged with his arms high in the air. And she got an autograph. I think Mr. Nixon was a shade more crooked than some of the others, but his biggest crime was being such a style-less douchebag in the first place. He was a man easy to dislike. Singing in the shower? Have to ask that gol-durned Ellen about that!