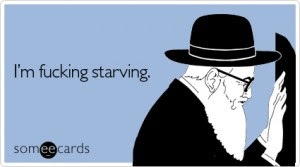 The Jewish High Holy Days are truly a special time of year, but to many Jewish people and especially those who enjoy the act of consuming food, there is one part of the Days of Awe that can be somewhat less than awe-inspiring.  That’s the day-long fast that takes place during Yom Kippur.

I have always wondered why any protracted period of time without food is called a fast because there’s nothing like a fast for making time go slow. And by sundown on Yom Kippur time has proceeded so slowly for many Jews that not only does it seem as if they are back in tenth grade Geometry class,  some actually hand in homework to their old teacher.

How to handle the Yom Kippur fast so your digestive system doesn’t beg you to atone for what you’ve done to it?   Here are a few suggestions:

Eat to excess prior to the holiday.  This is one you’ll love: eat not only as if food is going out of style but eat as if whatever comes into style to replace food is also going out of style. Start around late August and do not stop until sundown of the eve of, the day of, the fast of.  You will gain weight until you resemble the love child of actress Kirstie Alley and actress Kirstie Alley, if such were possible, and when the holiday comes your food forbearance will seem like a miracle akin to manna not dropping from the heavens.

Associate food with enemies of the Jewish People.
Food is not your friend!  In every day and every age, food has risen up and sought to destroy the Jewish people by inducing diabetes in our ancestors from wicked excesses of added sugar. Associate all baked goods with the doughy pastry engendered by Haman's tri-cornered hat, keeping in mind if you ever wore a stupid hat like that you'd have to forget about getting any fine women and set your sights on Mayim Bialik as she looks in The Big Bang Theory.  And try mentally linking all middle Eastern food with Pharaoh, whose heart was hardened not by God, but by excessive levels of the bad cholesterol.

Reflect upon how the act of fasting will build your character. Yes, you are like Gandhi in your strength and commitment! From this day forward you will face the world with new confidence, dignity, and purpose!  There you are sitting in a lotus position clad in a towel after many hours of reverential fasting .... and .... and .... there you go ripping your way to the refrigerator, knocking over whoever's in your way,  and feeding like a horse in a trough from the vanilla mint chip!

Imagine you are in the movie “The Exterminating Angel.” This is a classic movie by director Luis Bunuel in which guests at a fancy dinner party are inexplicably unable to leave the party no matter how hard they try. Imagine you are in the same predicament at Uncle Morty and Aunt Sarah’s last Passover where the matzoh balls were like hand grenades and somebody apparently stuck a soapbox under weird Uncle Harris who calls Sean Hannity "a flaming liberal."

And you can't leave.   Still feel like pounding down the brisket?

Realize Things Could Be Worse. Back in Biblical days the Jewish people used to practice animal sacrifice with goats, sheep, or any animal that couldn't outrun them, most Jews admittedly not being track stars.  If going a whole day without chowing down is your idea of animal sacrifice with you as the animal, imagine if each and every Yom Kippur you were required to go forth unto the land and slay something. Unless it were slaying 'em at the Palace, I'd say having to postpone your bagel and cream cheese until sundown would be a lot more copacetic than kicking the crap out of cow.

Fantasize about fasting leading to a wonderful occurrence in your life. As you leave the synagogue, imagine that the woman of your dreams weak from hunger passes out directly into your arms.  Romance ensues.  Hot sexual union is consummated faster than you can say "Shtupping!, " if in fact, you can say "shtupping" at all.

That is, unless your wife is around to witness the above referenced wonderful occurrence, leaving you embarrassed,  deflated, and all set with some heavy ass atoning to do next Yom Kippur.

And also, not to mention, hungry!

Always one to give me a good chuckle at the end of the day Perry.

That's my holiday gift to you, Libby! It's all I could afford.

Just wanted everyone to see that being Jewish isn't all hanging out with top comedians, film stars, and the cream of the show business crop on Steven Spielberg's yacht toasting each other with top drawer champagne.

One day of the year it's something other.