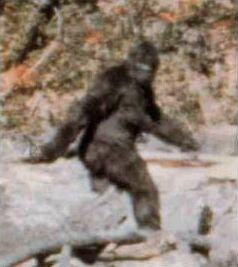 The  Zaprover Film:
Is this the Guy Who Dresses Up Like Bigfoot?

Hello, my name is Batt Moneychanger and I'm the founder of a team of four investigators convinced that somewhere in the wilds of North America there lives a legendary creature I've tracked  for over 25 years.  Join us as we continue in our tireless quest ...

Voice-Over:  The legends, tales, and folklore have long captured our imagination. They tell of a strange and elusive middle-aged man who dons a second-hand unconvincing ape suit and prances around in the woods dressed up like Bigfoot. Who is this guy? Why does he dress up in that suit? And is it hot in there?

Batt: Who is he?  It's my contention he's a random dude who perceives some oddball advantage in fooling others into thinking he's Bigfoot. Maybe he even expects to make money out of it!

Clift: He probably thinks Bigfoot is in line to inherit some!  [Laughter]

Eyewitness No. 1:  I wuz huntin' an' thought I saw me some kind of critter, but it turned out to be a big fat feller puttin' on a monkey costume!  Durned if he don't come up to me and ask me to zip him up in the back!

Eyewitness No. 2:  Me and the family, we saw him whizzing just outside the campgrounds,  the front of his costume fully unzipped. What a schmuck!

Voice-Over: The contentions of  the GWDULBFRO team are further bolstered by the famous Zaprover film, a four minute movie shot by the late Emile Zaprover in 1976 in a wooded area of Kentucky outside a strip mall near a suburban tract home development.

Batt:  Yes, the Zaprover  film very explicitly shows a nondescript middle-aged fat white guy cavorting in his tiny back yard while wearing a gorilla suit such as you'd get at Halloween Adventure on close-out the first week of November.  And if you look carefully, you can even see the white picket fence of his split-level in the background!

Voice-Over: Skeptics, however, dismiss the film as a hoax.  Many say that instead of a fat loser in a suit, the Zaprover film actually depicts a feral creature never before known to humankind.  And the alleged fence? In reality a pile of bones stacked high from the human victims the beast has brutally ripped asunder.

Clift:  Frankly we're used to such skepticism.  Columbus ... Galileo ...  the Wright Brothers ... us!  All we true visionaries must deal with those who doubt.

Batt:  But nothing will shake our belief that somewhere in the wild is a chunky overage nobody in a lame ape suit!

Dumbo:  I feel it!  I can feel the presence of the Guy Who Dresses Up Like Bigfoot in these marginal woods!

Voice-Over: Ahead in a clearing, the team spots something.  It looks to be an heavy-set under-educated man in a moth-eaten costume!   Clift and Dumbo try to make contact.

Clift: Hey, Bubba!  Didya see the big game last Sunday? Got some brewskis here for you!

Dumbo: Dude, you have to  check out the female campers a mile or so back. One of 'em's packing some big boobies on her!

Voice-Over:  Then the unexpected.

Voice-Over:  Back in the camp, Batt and the team are forced to concede no human alive has the kind of strength of whatever it is gored and maimed Dumbo. Verdict: this is not the Guy Who Dresses Up Like Bigfoot.

Batt:  Sorry. Major Fail.  But there will be another day!

Voice-Over:  Yes, indeed,  another day!  The GWDULBFRO will persevere, or at least three out of four of them will persevere, and continue in their bold and indomitable quest ...

Batt:  And one day, by God, I will find him!  Nothing  --- neither man, woman, child nor savage prehistoric man/beast --- will stop me!

Know what? I don't really even like this one myself. I think it's a funny idea --- anybody out there agree? --- but I didn't really pull it off. It didn't help that I've never even seen more than a couple of minutes of the show either.

Okay, Bigfoot? You and me'll keep searching for the guy who dresses up like you on our own.

Damn, I'm been discovered. They never would have caught me had it not been for those damn "Messin' with Bigfoot" jerky commercials. I'm a sucker for chemically preserved meat sticks.

I thought I noticed the resemblance right from "Harry and the Hendersons." Now that we've got you, False Bigfoot, the next time a huge menacing creature appears in the woods we'll know it's just a terrifying neanderthal like throwback to prehistoric times, and we can ignore it.