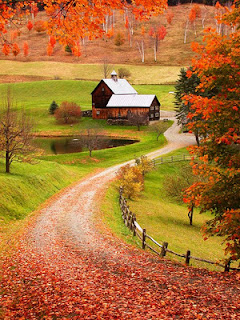 Look pleasing to you?
You're suffering from Fallophilia!

As summer 2013 winds to a close, once again there has been a rash of reports of people making deranged statements like "Gee, I'm glad this summer is over," "I've been looking forward to September, it's so hot lately," and "Fall is my favorite time of year; what's yours?"

Every year similar reports have been known to surface,  but public health authorities agree that such mindbendingly ludicrous and idiotic statements are increasing. "It's all indicative of a bizarre illness that we call Fallophila," says medical researcher Dr.  Henry Mergen, "and we are at a loss to cure it or even explain it!"

While normal in appearance,  those afflicted with Fallophilia may wax poetic about the beauty and charm of small New England villages, extol supposed virtues and wonder in fallen leaves and crisp clear evenings, or sigh contentedly while reading poetry by Robert Frost. All of which begs the question:

"We believe that many Fallophiliacs have a brain defect which causes them not to comprehend that they're going to be freezing their nuts off in a couple of months," Dr. Mergen explains. "They think the seasons recycle in the manner of  spring, summer, fall, spring, summer, fall and so on. Those who do actually realize there is  such a thing as winter are pretty much psychopaths and lunatics, aside from the ones who live in Florida."

What should you do if you encounter a Fallophiliac?

"Simply humor them," advises Dr. Mergen. "Let 'em traipse into the woods in their down jackets with no sleeves, grab armfuls of dead leaves and fling them playfully at each other, bob for pumpkins, or do whatever other insane nonsense Fallophiliacs are wont to do. The poor devils are sick."

"Just don't --- I repeat don't --- under any circumstances consider marrying one!"

Fallophilia is a perfectly normal condition when you live in a place that has temperatures in the 90s in the middle of September. Winter's just not all that cold.

Good thing I didn't cast you as the doctor in this post, Elizabeth!

aside from the ones who live in Florida.

I'm one of them. Finally get a little relief Oct to May

As Dr. Mergen stated, for you guys it makes sense. Everyone else is a wee bit nuts.

What if you've fallen and can't get up? Was there alcohol involved? If so, I may need a hot toddy before the first frost.

This last post has fallen and it can't get up. Who knew how many people really do seem to love the fall? Yes, I need alcohol involved to get through it, the hotter the better!