When It Comes To Korea, Trump has a Farr Better Idea 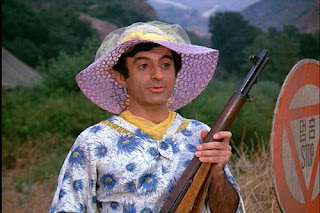 I want to tell you, friends, it was a very strange situation.

One day I was in Hollywood taping some spots for ME-TV and two government men with badges approached me and whisked me away and next thing I know I’m in the White House standing in front of Donald Trump.

“Why have you brought me here, Mr. Trump,” I asked.

“You’re the actor Jamie Farr who played Klinger on the television show MASH, aren't you?"

“I’m going to meet Kim Jong-un tomorrow in Korea and I need an established expert on Korea to help me.”

“Sir, I only played a character on MASH, which took place in Korea. I’m no expert on Korea!"

"You have to know more than I do! You certainly knew enough to wear a dress to attempt to get out of the army. Hadn’t they invented bone spurs yet?

“That no-talent liberal! What kind of ratings is he getting lately?"

“Did you bring your dress?  I want to make sure Kim Jong-un recognizes you for the Korean expert you are if I’m going to get the Nobel Prize.”

The next day we were in Singapore, standing in the meeting hall about to meet Kim Jong-un.

“There he is with his interpreter, Mr. Trump!”

“Look at that ridiculous hair!  Can you imagine a world leader with such goofy hair, Klinger?”

“From my limited experience, Mr. Trump, you have to earn his trust.  Don’t begin discussing business right away. Establish a relationship first.”

“Mr. Jong-un, I’m the president of the United States Donald J. Trump, I won the American election in a landslide such as no one has ever seen before, and here’s the terrific deal I have for you!”

“You sure are a quick study, sir.”

“We’re going to flood the North Korean landscape with delicious restaurants such as as McDonald’s, Olive Garden, and Applebees.”

“Mr. President, I thought we were supposed to try to make things better here.”

“We are! The people are starving.”

“Yes, but like I said, I thought we were trying to make things better here.”

“In exchange for that, Mr. Jong-un, you must give up all your nukes, bow before Zod, and ... put on a dress like Mr. Klinger here.”

“I don't think that went over well, Mr. Trump."

“Then I’m going to unleash fire and fury the likes of which the world has never seen!”

“You’re going to use nuclear weapons?!”

“No, I’m going to jump up and down like a spoiled child until I find the best scapegoat I can.  Maybe even your terrible low-rated television show!”

“But you can’t do that, Mr.  President. MASH is an American institution.”

“So is the Constitution. And you can see what I’m doing to that.”