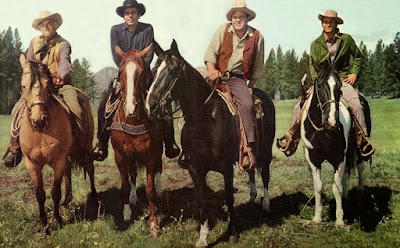 It was a ritual for many Baby Boomers every Sunday night in the late 50’s and early 60’s. First we’d watch Ed Sullivan with his panoply of diverse acts ranging from Elvis and the Beatles to Henny Youngman and Senor Wences to Topo Gigio and the guy who spun dozens of plates in the air with a host of very long thin sticks.

Then came the coup de grace, the fabled horse opera known as Bonanza!

Every Sunday night we thrilled to the adventures of Ben Cartwright, master of the Ponderosa Ranch and the patriarch of the Cartwright clan consisting of his three sons, Adam, Hoss, and Little Joe - adventures that today seem as contrived and pedestrian as the walkway across Main Street in the town where you live.

The show began with the four horsemen of the Ponderosa riding in from a distance right on to up on your TV screen:

Hoss (Dan Blocker), beaming a wide friendly “golly gee” kind of smile, sometimes doffing his hat, looking as if he’d lick your face if you offered him a beef jerky.

Adam (Pernell Roberts), dressed all in black was the only one of the four to be wearing a serious expression because what he wanted was to be doing Shakespeare, not Shoot-em-up Speare.

Little Joe (Michael Landon), smiling boyishly who would fall in love in every episode only to have his beloved die by episode’s end so he would be available to fall in love again in the next episode, and

Ben (Lorne Greene), the gracious benevolent father figure, perfect judge of any dispute between the brothers, and the best toupee wearer since Frank Sinatra.

What was truly unique about Bonanza, however, was that every member of the Cartwright family always wore the same clothing in every episode – same color and style cowboy hat, shirt, pants, boots and probably underwear too - presumably to firmly establish the personal nature of each of the characters in the viewers’ minds.

The last few seasons, though, the embarrassed writers could take it no more and finally began to address the Cartwright clothing conundrum right in the show's  scripts:

The Cartwright Family about to sit down to one of their family dinners.

Ben:  You know, Adam, Hoss, and Little Joe, we’ve a got real problem here in Virginia City with George Gilchrist and his outlaw gang.  They’ve sworn to kill us all for bringing his brother, Cookie Gilchrist, to justice.

Adam: With all due respect, Paw, we’ve got a bigger problem with Hoss here. Hoss, you stink!  I haven’t smelled anything as bad as you since eight year old Little Joe fed beans to ol’ Bessie! Take a shower already, dude!

Hoss: Adam, you know none of us have taken a shower in 14 years! We’re not allowed to change our clothes or take a shower until the show’s cancelled. Or until we die in the show, whichever comes first!

Little Joe:  You should talk, Adam!  You smell like the New York City sewer system!

Adam:  And you Little Joe, with that avalanche of dandruff, I could ski down your back.

Ben:  Boys, boys, stop!   I know we all smell like year old cheese and we’ve all been gagging through the last several seasons. But I think the reason is that the money saved in costuming from wearing the same duds each week is producing a bundle of bucks that will be shared with us later in residuals!

Hop Sing (the cook, entering): You stupid Cartwrights!  That’s not how residuals work!  And they don’t even exist yet either! And it really stink in here!

Adam:  If only George Gilchrest does kill us all, we’ll finally get to shower and change our damn clothes!

And this, kind millennials, was our Sunday night ritual.