No Failure to Launch in the Year of Perry Block 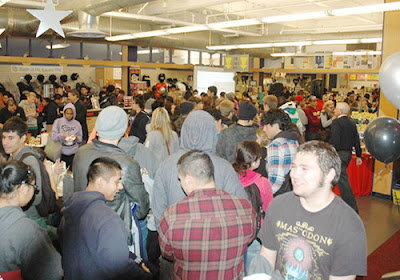 My Public!
(Not really)


As you know, this is The Year of Perry Block.

This year my new book Perry Block-Nouveau Old, Formerly Cute enters stage left. Or stage right, depending how much you spent for your seats.

On Sunday, February 25 – on what would have been George Harrison’s 75th Birthday – my formal book launch took place in Narberth Bookshop, a charming little bookshop in the charming little hamlet of Narberth in charming Main Line Philadelphia.

If only I were so charming, my book would be a best seller faster than you can say “Interview with Terry Gross!”

About 25 people attended the launch, some having read about the event in a local newspaper which built me up to such a degree it made me sound as if I were David McCullough. The only manner in which David McCullough and I are alike is that we both have varicose veins.

I was presenting in a room lined with distinguished tomes authored by everyone from Virginia Woolf to Michael Wolff. It was a little intimidating to be among such mostly august company and I expressed this to my publisher Donna.

“Donna,” I said “I think James Joyce is turning over in his grave.”

As I ran through my 20 minute presentation about the book and how I came to write it I thought about how the prospect of speaking in public used to terrify me. Through much of my life it had in large degree prevented me from doing many things I wanted to do, such as being in plays in school, doing stand-up,  and seeking more leadership roles in organizations.

I read two selections from my book, One Last Bedtime Story and Caribbean Cruise Call, and received a nice response and some laughs. Then I asked for questions.

“Yes, I was,” I answered, “but when I was younger I was afraid to try to perform it. In the early 70’s I went with my friend  Andy to the one comedy club then in Philadelphia for his first attempt at stand-up.

He began to feel nervous and said to me ‘Perry, will you be disappointed in me if I don’t go up?’

‘Not at all,’ I said, ever the reassuring pillar of strength. ‘Let’s go get stoned and get something to eat.’

But my friend did go up, and it was the start of a career that has included his writing for many successful television shows over the years.  Damn! If only I’d urged him on with on with a “you can do it,” I could have taken credit for his all his success!”
If only I'd urged myself on with similar words back then maybe I could have taken credit for a little bit of success in my own right.
The Q & A over, it was time for those who bought the book to line up for the esteemed author to autograph it.

“What’s your name?” I asked each person as they came forward. I inscribed each purchaser's book with a separate message for him or her, each successive message more illegible than the one before.

Yep, as it turned out I handled the whole launch thing with the same aplomb as J.K. Rowling, only without the mega successful best sellers.

How silly to have ever been afraid of such things!  How easy to recognize that now. The only cure for aging, if such does exist, is to do your best to leave nothing on the table.

In this, The Year of Perry Block, let’s us both keep that in mind.