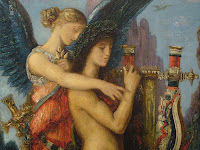 I’ve had a fairly bad case of writer’s block for the past several weeks and that means one thing.

It’s time to seek out the Muse, the lyrical and poetic spirit born of ancient Greece whose raison d'etre  is to provide inspiration and creativity to enhance and enrich my writing.

Unfortunately I don’t have one of those. I have a muse who took an on-line course in Inspiring the Hack Writer and provides me with ideas like “suppose we remake Get Out with Jewish guys instead of black guys as the victims.”

“Muse, would you come in here please?”

“Just a minute, Boss. Ha, ha, ha! The Stooges are on – that Curly Joe is a master of physical comedy!”

Fat, bald, slovenly, he’s the kind of muse a guy like me gets. If you’re looking for Sharon Stone as the Muse, better check with Joyce Carol Oates.  Or Paul Krugman, depending upon what kind of reading you’re in the mood for.

“Muse, I’m afraid I have writer’s block. I hate to tear you away from Moe gouging out Larry’s eyes, but I need some help.”

“What a coincidence!” exclaimed the Muse, appearing in my office with half an Entenmanns’ marble cake, which he promptly dispatched down his gullet.  “I have writer’s block too.”`

“Applying for disability. Happen to know if there's disability benefits in Pennsylvania for mythical beings?”

“If you get disability, Muse, you’ll just lie on the couch all day drinking beer.”

“Yes, but at least I’ll be able to pay you for the beer.”

“How did I ever get stuck with a muse like you?

“Norman Mailer had just passed away and I migrated over to you.”

“YOU were Norman Mailer’s muse?!”

“No, I was working for a guy who wrote fart jokes. I was just using Mailer as a point of reference.”`

“I’ve been thinking, Muse.  Perhaps some therapy could help you with your writer's block. You know, I go to therapy myself.”

“Go to therapy? You're the Poster Boy for Therapy!"

"Well, I need some help now and then."

"Now and then? How long you been seeing Dr.Kropotkin?"

“Since he was in medical school.  But I think I'm about to make a major breakthrough."

“Does Kropotkin have a comfy couch?”

And so the Muse trotted off to see Dr. Kropotkin.  Within a week he came into my office with a new fire in his eye and what appeared to be a new enthusiasm and lust for life.

“You were right Boss!" said the Muse.  "I’ve learned so much from Dr. Kropotkin!”

“Great! So you're ready to help me now?”

"No, but I'm ready to charge you $300 for a 45 minute hour, yawn while I scribble on a note pad, and talk about your lack of a sex life all you want!"

And, by the way,  I still have writer's block.

How's that for low-brow?

I'm having problems with my muse too. Right now, he's in a juvenile detention center locked up for using the word penis five times in the same sentence. I hate to thing what will happen when he learns the word vagina. He'll probably go to work for Trump writing tweets on new groping techniques.

When he starts using those words together, he'll be a much more exciting writer than I am. "Penis" eh? Well, if memory serves me ... But I am in the market for a better muse, say, one for whom writing in whole sentences isn't such a challenge and who doesn't specialize in limericks in pig Latin.