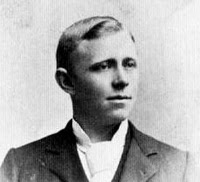 President Trump lashed out today at Nordstrom’s for dropping his daughter Ivanka’s clothing and accessories line, placing the blame squarely on immigration to the United States.

"It was all the fault of an 1887 immigrant to the United States named John W. Nordstrom!" said Trump.


“Had there been a ban back then on immigrants into the United States from the outlaw nations of Iraq, Somalia, Iran, Libya, Sudan, Syria, Yemen, and Sweden, “Ivanka would not have been treated as horribly as she has been by Nordstrom’s because Nordstrom's would have been a true-blue American store like Armstrong's or Trump's!"

“Instead, bad actors like John Nordstrom flooded into the United States, made fortunes through hard work instead of by inheriting them, and founded department stores for the express purpose of committing acts of terror against beautiful and sexy owners of fine clothing and accessory lines like my daughter Ivanka!

"If they had had Donald J. Trump Extreme Vetting back then," added Trump, "a dishonest loser like Nordstrom would have been exposed and returned to Sweden to found Ikea."

Ha... I guess that Sweden will be on the banned list soon despite the fact that we were the first European country acknowledging the US Independence... But actually the first country to do so was the Muslim country of Morocco.

Yeah, Skippy. I hope they come out with a new "Super Smooth" peanut butter to celebrate his appointment to the court.

If Sweden had been on the banned list Perry, you would have never gotten to enjoy ABBA. And we all know what a groupie you were of that band.

I always learn from you, sir! And I'm going to do my best to get Sweden off the list. Hope things are going well with you and the FF world.

I had forgotten about that. I think it's too late to ban ABBA, but I'm going to encourage Skippy to try. Assuming he and Trump can find Sweden on the map.