What's It All About, Afikomen? Damn!
I would have helped her look.

The Passover holiday which begins this year on the eve of Friday, April 22 is a truly magical time.

Jewish families gather together to enjoy a lovely and traditional evening meal known as a Seder while recounting the ages old story of the very first Passover which celebrates freedom and features the needless deaths of thousands of people, including children, at the hands of pestilence, plagues, and the arbitrary whim of an often tyrannical and brutal Old Testament God.

Looks like somebody got up on the wrong side of the cloud!

But despite all this, Passover is probably the most fun of all the Jewish holidays, and one of the traditions that makes it so is the hiding of the Afikomen.

So, what's it all about, Afikomen?

The Afikomen is half of a piece of matzo which has been broken in two early in the Seder and set aside to be eaten as a dessert after the meal. The name "Afikomen" comes from the ancient Hebrew and means "that which makes a dry and shitty dessert."

The procedure is as follows: The leader of the Seder, known alternately as the Trebek or the Sajak, takes the middle piece of matzo out from a stack of three matzos and breaks it in half.  Nobody yells at him for this because the matzo is supposed to be broken, but his wife may yell at him later about other stuff. (Optional).


The Trebek or the Sajak then wraps the larger piece of matzo in a napkin, teaches it to answer to the name “Afikomen” and leaves the table to hide the Afikomen somewhere in the home. This enables the children, who may have become restless during the Seder, to engage in a little harmless fun ransacking the house.  It also provides the adults the opportunity to talk dirty.

To find the Afikomen, the children will search high and low, over and under, and to and fro.  They may also search hither and yon, but only if the house is zoned for it. They will empty cabinets, turn over lamps, and smash fine glassware. They will sack the house in the same manner as Alaric sacked Rome, and some may even bring in Alaric to consult.
Here are some great places to hide the Afikomen:

1) Inside a book, especially if the Kardashians are your Seder guests.

2) Between the living room sofa cushions. Even the most intrepid youngster fears thrusting his or her hands into the change, chapsticks, combs, dentures, and whatever manner of man or beast is already lodged within. Frankly so do I.
3) In the sock drawer, where the socks may educate the Afikomen as to how to mysteriously vanish and turn up six months later wedged between the washer and dryer and covered with dust.

4)  Under the hood of the car. What Jewish person, adult or child, is ever going to look there?

When at long last one of the children locates and retrieves the Afikomen, he or presents it to the Trebek or the Sajak and in return receives a present, traditionally the tidy sum of one dollar.  With the changing times, however, that traditional present has changed. It is now a blender.

There's nothing like the delight in an 8 year old's eyes when he or she snags a four speed Waring blender!

Much as I enjoy the customs of Passover, there is a tinge of sadness of days of Afikomens gone by.  I'm no longer the child scrambling eagerly through my parents' house seeking the elusive matzo nor am I any longer the Trebek or Sajak -- or even the dad --- seeking the perfect hiding place for the next generation of Afikomens for my own kids.

So, what's it all about, Afikomen?

It's about memories, family, and tradition.  And for most of us, a hell of a lot better and sweeter desert at the end of the Seder than the Afikomen!

If you liked this post you may also like It's a Miracle!, In Search of Big Eli , and The Year We Built The Sukkah.


If you hated this post, I hope you find yourself crossing the Red Sea, and just as you are almost fully across you hear a thundering voice echoing from on high majestically intoning "looks like you're shit out of luck, dude!" 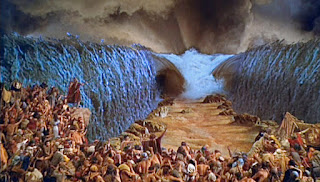 As a young Gentile, I used to enjoy playing hide the weenie. But all my girlfriends (and eventually my wife) soon tired of the game due to the repetitive nature of my choice of hiding places.

Nowadays, we tend to search for my glasses, the aforementioned missing socks, items we just held in our hands two minutes ago, and the television remote.

I understand the game that you used to play was called Find the Weenie and it's still being played. But less all the time.