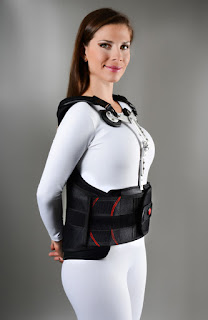 This is the brace I wear.
Otherwise, that ain't me.

That is, I'm shrinking away before your very eyes.  Where I was once five foot ten, not tall enough for the NBA but tall enough to reach everything in the cabinets atop the refrigerator, now to reach over top of the freezer is tantamount to reaching the summit of Everest.

Both Daniel Radcliffe and Kevin Hart call me "shrimp-ass."

The culprit is scoliosis, the condition that renders my spine a human-scale replica of Lombard Street in San Francisco.  And though scoliosis is not reversible,  Dr. Kropotkin has prescribed a back brace to help me stand up straighter and provide a much-needed boost to my posture and self-esteem.

I had hoped the back brace would be undetectable when worn under clothing, but unfortunately it produces a sizable bulge in the back. The net effect is that I look like a hunchback with very good posture.  So it was with trepidation and uncertainty that I, bound-up in my bulging back brace, ventured forth into the world for the first time.

In the Wawa convenience store, my first stop, I felt that all eyes were upon me, generally at a rate of two per person.

"I have scoliosis. You know, curvature of the spine."

"That's tough, friend.  Must hurt bad. Here let me get you some coffee!"

Well, free stuff!  That's not so bad. Even though the scoliosis really doesn't hurt, it seemed the brace served as a conversation piece that had its inherent benefits.

"Are you in much pain, sir?" asked a woman older than I am, if such even exists anymore.

Why not up the ante a bit, I thought?  Let's see what kind of prize in the Cracker Jack box I can wangle out of this one.

"It only hurts when I laugh," I replied, "which the doctor has ordered me to discontinue doing."

"Poor dear!" she said. "Would you like a corned beef sandwich?"

I sure would! I wouldn't have minded some coleslaw and Russian dressing too.

"What happened to you, mister?" asked an eight year old boy when I was food shopping several hours later.

I wasn't going to get much out of the little tyke, I realized, but let's practice taking it to the next level anyway.

"It's a very painful football injury, son.  Years ago when I was quarterback for my college team I was running into the end zone for the game winning touchdown when I was flattened by a 350 pound linebacker."

"Don't bother the nice man, Johnny," came a nearby voice emanating from a quite attractive middle-aged woman.

"He was a football hero, Mom-Mom," said Little Johnny.

"Oh, really!" replied the woman. "My ex-husband played football too."

"Oh, sorry you hurt so bad!" said Mom-Mom empathetically. "Maybe after I drop Johnny off at his mom's you and I can have some coffee and get acquainted?"

Well, what do you know? The back brace is helping me after all.

Too bad it isn't doing anything for my back.

If you liked this post, you might also like I'm Melting!,  Vitilago Whoah-oh!, and The Incredible Shrinking Jew. If you hated this post, I hope you begin dating the woman wearing the back brace above,

and it turns out the brace doubles as a chastity belt!

Thanks, Larry. But I know you're just digging the hot girl, not my writing.

In general I'm opposed to using physical maladies to attract dates but since your charm isn't working ...

No, my charm isn't working much in this century. Devious methods? Well, we'll see ...

If it works, I'm buying stock in the back brace company.

No happy ending in my ending yet. I'll keep you posted.