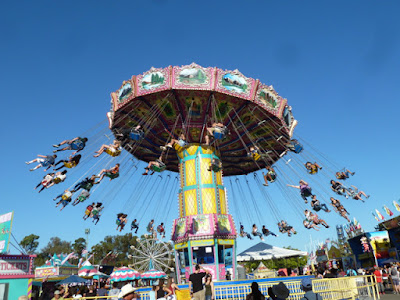 Once there was a little mushroom growing in a field.

The mushroom began growing and soon it was twenty feet tall. It was so tall that a local entrepreneur made it into a ride for children. It continued to grow and soon it was as high as the clouds and only the bravest children rode it.

It continued to grow and soon it reached into space and only those children who could hold their breath a long time rode it.  A spaceship flew by and Pinterass said to Myspace "I've never seen one of those so incredibly big!  It's so huge, it's festooned!"

Fearing a race of giants, Myspace and Pinterass decided not to invade.   And that is how the little mushroom saved the Earth.

Wow, Perry, you're my hero! Cheers for the mushroom. I thought this was a hilarious spin of a story.

Thanks, Amy, but it was all the mushroom, not me. Believe me, considering what scared the two aliens, it was certainly not me!

Yes, that's exactly what it was - a festooned mushroom. Thank you, Alicia.

You don't hear it enough for the mushrooms. Good one!

Save the earth? I think a mushroom that size could knock us out of orbit!
Good piece.

I saw what you did there... Pinterass. Hahahaha! Cute story!

Yes, they are not nearly as popular a vegetable as they should be. Damn peas always stealing their thunder!

Hooray! At last someone to keep me company in the silly story department!. I just love this. Well done.

Not to mention all the festoons!

And don't forget Myspace. Everyone else has.

Thanks, Rosey! Gonna check out your silly one now.

A festooned mushrooms for the rescue, who'd have thought... We won't need space travel if this thing keeps growing.

Good grief, Perry. I think you've been eating mushrooms--and not the ones from the produce department at the grocery store. I do admire your use of the word "festooned." We don't here that often enough. Keep up the good work.

So this is what mushrooms do to the imagination? I'll stay away from experimenting then :)

you gave an alternative on how to get high on mushroom.

That's true ... just hand on to the festoons!

Thanks, Russell. Now help me festoon this thing. No, I mean the mushroom!

I agree. Let's all stay away.

I guess I did. I didn't realize.

Thank you. Up, up, and awayyyy!

Fun ride too, if you can hold your breath!

A mushroom with a view! There is bound to be bit of magic in it. Fun read.

Wow. A magic mushroom. Cool. I want to ride it. With cool space children, and wordpress things along with Facebook and Amazon and FedEx and Starbucks and Milky Ways. Far effing out Berry Plock.

That sounds a bit like Jack and the magic beanstalk. I'm wonder what else was growing in that field that produced a mushroom growth spurt like that. Did anyone trying smoking it? Were you smoking it when you wrote the story? Just kidding. :D No wonder some people don't trust modified food. Well done, Perry. :D --- Suzanne

As soon as I read the first sentence I saw the mushroom and thought “Of course Perry would see a mushroom”.

The magical mystery tour is waiting to take you awaaaaaaay....cute story.