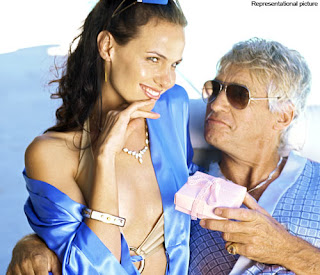 From time to time  - actually most of the time - I engage in fantasies about hot young women to help satisfy urges that are as likely to be satisfied in reality as Bernie Sanders is to iron one of his shirts.

In good conscience, though, I cannot fantasize about a woman who would naturally find me as appealing as her dad's poker partner unless I first create a back story explaining why she now finds me as irresistible as a hot fudge sundae.

Her name is Andi.  She is 32 years old and blond with eyes so blue you could practically swim in them. She is pursuing a graduate degree while working as a waitress at a nearby diner where I've impressed her with my charm, style, and tipping at 80%.

"Andi, this can't go on!  You should be with a younger man.”

“Younger men bore me.  You know that I’ve pre-subscribed to “AARP Magazine” for years now so I can get off on all the pictures of the hot senior guys!  Perry, your paucity of hair, crumpled face, and circles under your eyes just turn me on!

That's the Fantasy Preamble, which serves to make the unpalatable palatable. Without it the closest I am likely to come to pillow talk with Andi is her asking me if I like the pajamas she bought her dad for Father’s Day.


Her name is Susan.  She is 37 years old, red-headed and passionate, and an accountant that I met when she did my taxes.

"Perry, ever since I first prepared your 1040 I knew there was something special about you."

"Was it the income under the poverty line?"

"Perry, I know you're worried about the age difference, but I don't care!

"Well, I guess ineffability does have its virtues.”


Her name is Helen. She is 38 years old and a talented artist about whose work I have become passionate since I saw her on Facebook in a bikini. She has begged me to allow her to paint my portrait.

“Almost done, Perry!  You are such a marvelous subject!”

“Thank you, Helen.  You know this isn’t the first time I’ve been painted.”

“I got totally covered at paintball on my son’s ninth birthday.”

“Who’d want to have sex with someone like that?”

Fade Out.  Fade Way Out.

Sometimes - I’m afraid - even the best of fantasy preambles doesn’t always quite get the job done.

This one made me chuckle. Two points.

Thanks, Brian! How about you and me steppin' out with Andi and Karen? You lucky bastard, you don't even need a Fantasy Preamble!

I loved that you used the word paucity instead of comparing your lack of hair to the odds of finding a water fountain in the middle of the Sahara.

Why do you keep breaking these poor fantasy girl's hearts? It's not everyday a man your age comes across a hot young thing with poor vision, big boobs, and a desire to date a guy old enough to remember when Ike was in office. Geez, Perry. I swear, you'd screw up a wet dream.

I would screw up a wet dream if I ever had one at my age. As for breaking hearts, yes, I have to admit the first one I ever broke was that of Mamie Eisenhower. But that's another story for another day. I guess she just likes guys who will one day have a paucity of hair.

Is it sad that my fantasy dreams are of me seeing myself take a nap?

No, because they may very well come true, preamble or not!

Loved it! One thousand points.

Thank you! Next I'm going to need you to work with Extremely Average to get his points up too.