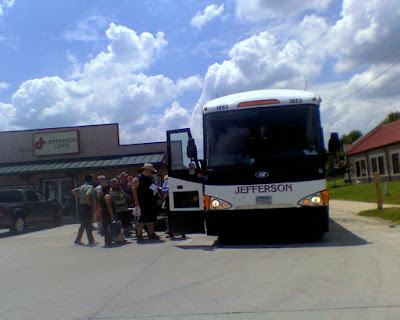 It was 8:15 on Tuesday morning in Jefferson City, and already they were lining up to board Jefferson Lines Bus No. 1863 bound for Mt. Bailey for the weekly meeting of the Jefferson City Blame Someone Else Society.

The meetings were held in Mt. Bailey because it had a much bigger town hall.
Bob Byron had founded the Society secure in the conviction than anything bad ever happened to him was caused by his foreman, Drake Beighley.


At the Jefferson City Blame Someone Else Society, members railed against those responsible for their misfortunes.  It was the overly demanding boss, the ex-boyfriend, the hard driving assistant coach, and so on.

It was now 8:40 A.M. The bus driver flung open the doors and bade the passengers enter:

First up, congratulations to the Chief Honcho of the Friday Fictioneers, Rochelle Wisoff Fields, on her third anniversary helming the Fictioneers.

Rochelle has graciously suggested we may repost our stories from the week she began her august duties and she herself has posted the same picture from that week. So never missing a chance to screw off, I have herein submitted my same story from that week, but with a difference. I have edited it such that, even though it still exceeds 100 words, it no longer brazenly thumbs its nose at that limit as it surges on past it.

You should surge on over to the stories of the the other Fictioneers by clicking here. And thanks again Rochelle; hope we never see you on the Good Old 1863.

We both look good with bus tracks down our backs. I usually blame all my stories that suck on you, and I'm sure you do the same.

I would were I to have a story that sucks.

In my younger years, some friends and I decided to rotate blame through the duration of our weeklong travels together. It actually worked quite well. When something went wrong, the person whose day it was gladly stepped up to take responsibility, and we ended up laughing away our woes. I'm not sure that would work for the general public, however...

Hilarious again, Perry. The bus driver seems to be going right along with the spirit of the group. Lucky you. I wasn't part of the group the first time, so have to rack my brain, such as it is, and come up with something original. Well done. :D --- Suzanne

Sounds like a pretty rewarding society to be a member of. Do you have a membership application form?

I know a lot of people who are life-long members of that society. No bustracks on their backs, sadly. Fun story.

Ha.. I wonder if the society could ever agree on an agenda even without putting a blame on the board.

What a creative, funny take on the prompt. Love the last three sentences, especially the "Throw under" one! Well-done!
~Vijaya
http://magicsurrealist2013.me/2015/10/22/jeffersons-big-day/

We'll let you in, even though it's all your fault you didn't join in the first place!

Thanks for relating that story, putting my post into the realm of the possible. I'm glad to see that it actually works. However, if it didn't, it wouldn't be my fault.

Up until my retirement I worked for two charger members of the Blame Someone Else Society. I won't say that I'd like to see them with tire tracks...actually...
Happy to give you the week to your own devices. On the other hand, was that really wise on my part. At any rate thanks for staying on the bus. Now keep your hands inside the bus and stop making faces at Russell.

Yes, but it would have been more fun, if not for you!

Don't blame me, everybody's always screwing up my agenda!

Thank you. I'm sure your comment would have been even more positive if not for all those other conniving Friday Fictioneers!

Thanks, Alicia. But it would have been more clever if not for the rotten people in Jefferson City!

And I want to point out that I didn't screw that up, Rochelle. YOU DID!

"Throw under." Indeed. I think quite a few of us have been on that trip.

ha ha...never heard of that society. ha ha . Good one.

Hmmm.... now I'm understanding some people I know... they must be members!

I too posted a re-run. I can finally do it! I'm a seasoned FF. This sounds like my kind of society, Perry. Very funny and enjoyable story.

I would love to write that you wrote a great story but then I'd have to blame you for not writing it.
Randy

The last sentence was a killer!

Thanks! It's your fault you've never heard of it though.

Most of us are members. And it's each of their faults that they are.

Thanks, Amy. Okay, I'll waive you in.

I didn't understand that at all, but thanks, Randy. I think.

Thanks, Dawn. But it's your fault if it kills anyone!