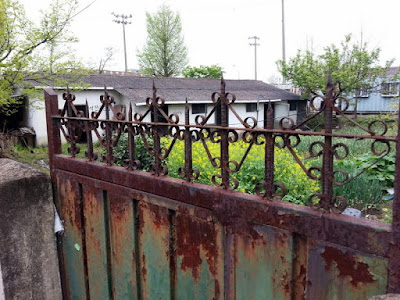 Charles hurled himself into the center of the pack of savage dogs!

"Just keep going,” he thought.  “Better to try to blast through them than to fight them.” And he got through with only one ear ripped off.

"So no one ever escapes from Devil's Island? I'll prove them wrong!"

Charles had climbed through the tunnel he'd been digging for 16 years, swam through the shark infested moat, navigated the minefield, and now came to a low lying fence beyond which was a flower strewn field and a strip of international land.

Racked with pain, he flipped over the fence.

“Nobody escapes from Devil's Island,” said the guard now upon him. “We know everyone's fatal flaw.”

And my fatal flaw apparently was my last post "Seinfeld, Starring Cookie Monster as Jerry," which received a response not seen before in Western Civilization since the Gallup Polls generating during the Bubonic Plague.

I thought of making myself the prisoner on Devil's Island as a sort of punishment but realized that I'd be as unlikely to throw myself into a pack of wild dogs as to sit through a concert by ABBA, so Charles was designated to plot the escape.  You should plot your escape to the offerings of the other Friday Fictioneers on the picture prompt above by clicking here.

Nobody ever escapes from Devil's Island.  And that's nothing to sneeze at!

Didn't Papillon do it?

BTW, I agree with you on the ABBA aversion.

Devil's Island, isn't that where they're holding the next Republican debate? Poor Charles. I don't blame him for not wanting to sit through that mud-slinging event. Even an ABBA concert comes in a distant second to that.

Yeah, I guess so, but let's pretend he didn't. Sorry Steve McQueen isn't around to dispute that.

Thanks, Jan, yes all stories about Devil's Island are hilariously funny. Less funny is the inexplicable success of ABBA.

Thanks, Rosey! Happy to be clever and amusing, wish I were also rich!

After they ripped off Charles' other ear, he still said an ABBA concert would have been worse. He was thankful that at least he can't hear now.

Hilarious, Perry. There seem to be more allergies these days. What's with that? Is someone using allergen warfare on us? Poor Charles. You really put a character through hell. :D --- Suzanne

That was so funny. Death by sneezing and that too self-inflicted :)

Yes, it thwarts my escape attempts every time. You?

He deserved it. He stole a loaf of bread from Jean Valjean.

Bugger! Now I'm going to have to read your last post to see what you've been up to!

Many people have told me reading it is worse that imprisonment at Devil's Island. Although there is an escape; it does end!

Abba's not so bad. You just have to twirl around and it sounds okay. I can hear the "Dancing Queen" now. Whatever that song is. Ah, close but yet so far. Funny one, Perry.

Silly boy! No one escapes from Devil's Island just as no one expects the Spanish Inquisition. Does that make sense? Probably not, but so it goes.

Can't see what all the fuss was about? The Allergy Sufferes Union suing you?

Yes, and the International Association of People with Low Standards in Music are suing me on behalf of ABBA too.

I dunno. I understand they do not play ABBA for the prisoners at Devil's Island. Why? They're not that cruel.

Actually I do expect the Spanish Inquisition and I do want to sit in the comfy chair. But nobody escapes from Devil's Island!

Oh darn!! and I could not help but imagine the field was filled with ragweed (which I do sneeze about until we finally get a freeze here). The reference to Papillion in one comment made me realize how reading that book motivated me to write again.

:) The best laid plans can overlook the simplest truths.

A field of flowers as the unsurmountable barrier. Hilarious.

Great! Wait, it wasn't me that motivated you?

True. He should have brought his inhaler.

Thanks. And there's much more fun in store when he gets back to Devil's Island.

Oh no! Allergies got him!