Nearer My God Particle to Me (FF) 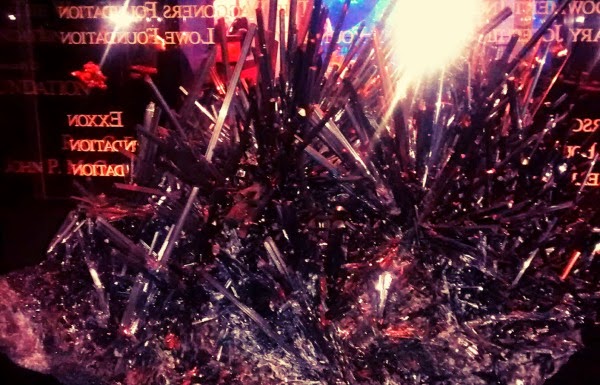 "You mean the God Particle?!”

"Yes, the final root building block of all life, of all matter, and even of all Governor Christie, should there turn out to be enough of them. Here, take a look through this high strength microscope powered by my Apple IPhone 6."

"Why .... Wow! The God Particle is so colorful! It looks like a cape Liberace would have worn!"

"Exactly! You see, the Universe is not organized according to mathematical principles as once thought, but according to the tastes and styling of Mr. Showmanship himself, Liberace!”

“I guess the Universe could do worse.”

“Indeed so.  Provided you like ermine and gold lame."

I have no explanation whatsoever for this one, other than that I was in a silly mood and I've never liked math, so why not organize the Universe under a more flamboyant standard such as that of Mr. Showmanship, the late Lee Liberace?

I'm sure the many other Friday Fictioneers have done better and more credible with the picture prompt above, so I hope you'll quickly click here and be transported to universes far far away and long long ago possessing much much better stories.

In the meantime, I'm going to try to figure out how the God Particle came to have the word "Exxon" written on it, along with all its normal sequins and streamers.

Gee, and all along I thought Wonder Bread was the building block of life.
Live and learn...

Dear Perry, You make me laugh again - Liberace was a real showman! I like your story! Nan :)

I looked up Governor Christie. Ha! Seems he's regularly in the soup. What a nice man.
Fun story, but what if there's no god?

I remember Liberace's teeth and his jackets! Your imagination never ceases to amaze me!

And three cheers for silly moods!

Thanks for the laughs, Tay.

Your silly moods brighten the day, Perry. Wonderful take on the prompt. Alicia

This is perfect. And now the Universe makes complete sense. How did we just not know that it is Liberace behind it all? I like the mention of the iPhone, such a major force in our lives. Great, Perry!

Well, I understand that Liberace liked Wonder Bread. At least judging from his boy friends.

Thanks, Nan! I don't particularly like this one for some reason - maybe I'm kind of grossed out to think my universe is ordered according to Liberace - but thanks for your support!

The God Particle does not require that there be a god. It is just a building block and I understand mostly made in China. As for Governor Christie, he'd actually make a good soup.

Thank you! Mr. Showmanship thanks you too.

Yes, I think his teeth are the model for the clouds, his jackets everything else.Thanks!

Silly moods, and silly walks! Thanks.

Thanks, Alicia. Yes, a universe run by Liberace is a wonderful thought!

Thanks, Amy. Now all we both need are flowing capes to be at one with the universe!

hahaha very good. I recently went to Hobby Lobby and bought some candelabras for my piano....to celebrate Liberace....
When I asked the young sales clerk where to find the candelabras, she said, "The What?"

Wow, Perry, you pulled that one out of an old piano. :-) But since I got all the references, I thoroughly enjoyed it. Hope it's warming up in your neck of the woods.

Fun story, Perry. I enjoyed the way you picked up on the array of bright colors. With a photo prompt like this, the "what you see" is certainly way more important than what all of us are actually looking at. For crying out loud, I took the picture and I'm not exactly sure what we're all looking at. Isn't that half the fun?

I understand the God particle better the way you describe it, Perry. Thanks and well done. :D Suzanne

I can just see you in a flowing, sequenced cape running all over Philadelphia. You may have to sew two of them together for Gov. Christie.
Isn't he like Billy Goat Gruff and won't let people cross the bridge unless they pay an exorbitant toll?

Little did you know you were adding to the structure of the universe! Nor did that naiave young kid. Thanks for the hahaha!

Glad you liked it, Janet. I actually find it a bit too silly for my tastes, but they can't all be gems, like Liberace wore. And nope, still freezing here.

Thanks, MG. But even I'm disturbed by a universe run by Liberace. I wish I could "unsee" the concept. I'd be happier with Exxon, I think! Thanks for writing.

Well, just "Watch Mr. Wizard here as I make all science palatable, if not totally false.

All he has to do is stand there and no one can cross the bridge. And he's not getting my flowing, sequined cape!

I knew that we were doomed.. I just knew were all the search for knowledge would take us.. Please give me ignorance.