Attack of the HuffPost Haters 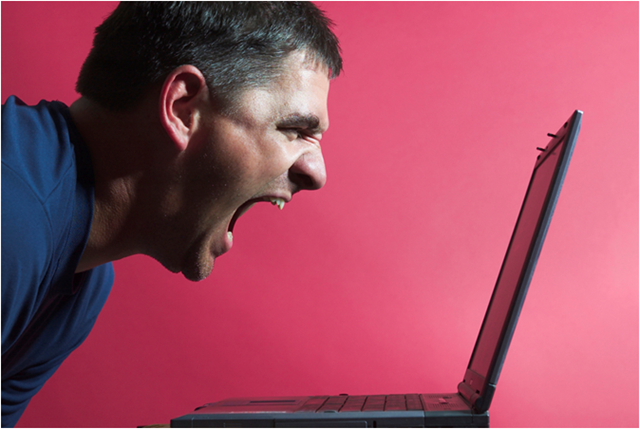 Recently I was privileged to have a piece of mine published in the Huffington Post in that section they have that's dedicated to people 50 and over.  I use the word "privileged" a bit facetiously in that almost anyone who submits an article can be published in the HuffPost unless the article takes the position that Ariana Huffington ought to break down and pay her writers.

The trick to success in the Huffington Post is to have your piece featured as one of the major posts of the day.  That way it shows prominently on the HuffPost web page where you garner the greatest number of readers and can potentially nail as many likes as there are angels dancing on the head of a pin, which is where they generally hold their dances because you can rent the hall cheap. If your article is not featured, it will reside in the HuffPost bargain basement where you'll probably get fewer likes than there are members of the Katherine Heigl Fan Club.

So --- to backtrack here ---  recently I was privileged to have a piece of mine published and featured in the Huffington Post in that section they have that's dedicated to people 50 and over.  As a result I received about 2,100 likes, a record for me which exceeded my previous high by about 2,100 likes.  This was extremely gratifying for someone who usually sat alone at lunch in seventh grade.

There was just one problem,  something I had not anticipated.  Along with all the likes, I was also besieged by one of the most potent, pernicious, and dangerous scourges of the 21th Century:

The post was 60 Reasons that  60 is Not the New 40, a hopefully humorous bullet point exploration of the different social frames of reference of the two generations.  It was not intended to be a sociological analysis as to whether people 60 years today really are the same as people 40 years old in 1950 or a critique of the Baby Boomer generation of which I am so proudly a part.

It was jokes 'n stuff.

But the HuffPost Haters thought otherwise.

"This was a complete waste of time to read and write ..."

"This piece was insulting ..."

I don't remember, what was the epithet I called your mother?

Lots of things, but if you were really perceptive, you wouldn't have to ask.

Great!  Could you help me with the next one of these?

"This was unfunny and unproductive!"

Not so! By being unfunny, countless productive hours were saved by people not reading it."

One writer went so far as to call me a "clueless idiot."  I would have taken great offense if he hadn't made such a good case for it.

Now in fairness, everyone is entitled to express his or her point of view and some who had issues with the post expressed them in a highly considerate matter. But the HuffPost Haters seem to delight in a rudeness that is wholly uncalled for, especially when we're talking about a post whose purpose isn't exactly to chart out the definitive route for the future of Western democracy.

I'm proud to say that in responding to the negative commenters, I took the high ground.  I did not answer in the manner above. I responded politely to their concerns and expressed regret that they may have been offended. I showed class.  I showed sophistication.  I accepted constructive criticism.

Now let me add just one thing further:  THEY CAN ALL KISS MY TUCHAS!!!

Now, if you'll excuse me, I'm off to count my wickedly excessive profusion of likes.

See ya in the bargain basement!

Email ThisBlogThis!Share to TwitterShare to FacebookShare to Pinterest
Labels: 60 is the new 40, 60 Reasons why 60 is not the new 40, aging angst, Ariana Huffington, Huffington Post, My Baby Boomer Life

Take heart. Anybody who uses the phrase "I can twerk with the best of them" is clearly over 60. Of course they are going to be insulted. That could be one of your signs that 60 is not the new 40. Nobody 40 would say that.

Hooray for you, Perry. There are people out there who hate a good orgasm. Don't ask me why, it's just part of their psychological make-up. Down here we call them "Aginers." They are against everything from chocolate soufflés to wiping on corn cobs.
I'm proud of you for getting published even if it was in the elderly section. That Ariana isn't a bad looking chick, except for her nose, and her mouth . . . oh well, she has nice hair. Too bad she doesn't pay. I'd be glad to pimp you out to the right magazine.

Thanks, Russell! I think I might be against wiping on corn cobs too, although I don't have any idea what it is. I'm certainly not against a good orgasm, which I seem to remember knowing something about from the days I was 40 and under, mostly under. Arianna and I do have a good thing going --- I read the HuffPost and don't get paid and I write for the HuffPost and don't get paid. It's a nice symmetry. So when you're ready to pimp me to the right or even the wrong magazine , PIMP AWAY!

Never. Read. The. Comments. You are a funny many, Perry. Don't let the Internet troll who have no sense of humor and take everything literally kill your spirit. Fuck 'em.

Do you know how many times I've written a sexual health article and the same repressed middle-aged woman who drowns herself in martinis and Fifty Shades of Grey has called me a whore with daddy issues? Fuck 'em. You write your funny articles and post them to the Huffington Post over and over again. Stupid people are not your intended audience.

This borderlined on a serious comment. I must shake that off. But for real, don't take any of that to heart -- you wrote something good, in jest, and everyone with an internet connection thinks they are Masterpiece fucking Theatre. This is a point near to my heart. Screw those people. Many others appreciated you and your work.

Congrats. I'm amazed at some of the comments people leave on news articles in general. So much hatred out there.

Thanks, Jean. Yes, it's strange that some of the comments seem to be so obnoxious. It's one thing to say the piece wasn't funny or even that the person found it ageist. It's another thing to call me names, tell me I'm a crappy writer, or to assert I've sabotaged our entire generation (In retrospect, there were two jokes I should have left out that might sound derogatory, but they were directed more at me than at Baby Boomers, and nobody mentioned them anyway.) Jean, thanks again for appreciating my work. I'm glad to see that I can be like Masterpiece Fucking Theatre for somebody who is 30.

Hatred you'll never see displayed here in this blog, Patti. I am a true sweetheart! Although there are certainly more than my share of pieces that suck.

Thou *art* a "True sweetheart!" and...your Art has been misunderstood...or made certain paranoid people uncomfortable...Either way, you are *the only* Comedic Writer I actually Read. I was thrilled that HuffPost had published you, and I feel hurt for you at the cruel comments...Now I question the type of readership HP receives; I do believe something's changed...

Although I am somewhat younger, I caught several of the references, and even if I had not, I still realize the wealth of a well-written article/story/poem/essay, etc...You *always* Write well. We became friends through Writing, although I write bizarre Poetry, and you write Comedy. I have never truly gotten stand-up comedy, but your written comedy is different...And if you were to stand here (~invite~) :), onstage, or anywhere, and recite any of your pieces, I believe you would break my stand-up-comedy-challenge!

I have not forgotten to send you thoughts I had after reading your PROSPERO AND GILLIGAN's ISLAND
http://www.perryblock.com/2014/09/prospero-and-gilligans-island.html
I truly enjoyed that piece, as well, and I ask your forgiveness about my belatedness...

Another post I love is
http://www.perryblock.com/2014/09/the-mirror-sprite.html.
I relate, as I have several Creatures who inhabit my mirrors...

I do not want to send you Words written so hastily as these, but I am in the midst of a family-school- related
situation, and must work non-creatively...stupid douments, loathesome forms!

I shall soon return to embrace thee once again, to tell you I think you are fabulously talented.

ps I read a few more comments...again, I see bitter, unhappy people who have nothing more exciting to do...and you can bet those creeps are puffing out their chests, saying, I'm published in the Huffington Post! Look in the comments section."

Thanks, CherylFaith, but do not worry too much about this. The comments really don't bother me all that much. Again, I understand the issues some of the people felt, and remember that the above article is also humor and as such is exaggerated. As always, your spirit shines through in everything you write and in a life that I know is filled with your share of challenges, I am amazed that you take the time to care about me. Some day we will talk, I'm sure, and in the meantime, I look forward to your comments whenever you have them. Thanks, Cheryl!