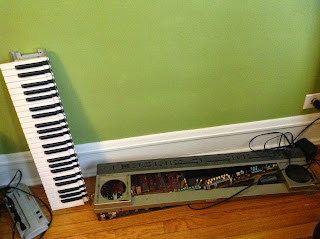 What a miserable existence! Playing this squeezebox in the freezing cold in this godforsaken town at eleven o' clock at night.  For mere peanuts.

Yeah, look at the monkey dance, he's really the star of the show!  Well, I owe Mr. Buckles a lot. Who else was there for me through the lean times?

Thank you very much, sir!  Thank you too, ma'am!

Time to  play the old standard:

God, I hate that song.  Whatever happened to my once promising musical career?  Okay, getting late, quitting time.  Here's what we made today, Mr. Buckles!  Whaddya got to say, fella?

"What have I got to say, Giovanni, you loser?  You don't return to your job at the Philharmonic til you've paid me back your whole damn gambling debt!"

For some reason , I only saw an accordion when I looked at the Friday Fictioneer picture prompt this week and couldn't get that old Donovan song out of my head.  That is, once I got that damn Lady of Spain out of my head.  (Of course, the typical  Hurdy Gurdy Man plays an organ grinder, not an accordion or squeezebox.)

I'm sure many other of the Fictioneers had more intriguing takes on the prompt, which you'll find by clicking right here on the monkey, the loan sharking Mr. Buckles.

'Twas then that the Hurdy Gurdy Man came singing songs of love .... once he paid off Mr. Buckles, of course.

The wrong simian is on the leash.

You retain your loon status for another week.

Hope he pays back quick enough.

"Lady of Spain" takes me to an episode of "Jeeves and Wooster" but yes, I'm also wondering what's in the air around your part of the world. Are you inhaling again??? Really??

Hi Perry,
Hope your showbiz debut in NYC went well. Hollywood could soon be calling. Well, let's be realistic. Somebody will be calling, probably to sell you magic beans. But I do hope to see your stellar performance online. Remember there are no small parts, just small actors. You know, like Danny DeVito.
Your story this week goes in so many wild directions, but it does teach an important lesson, don't gamble with monkeys. I hope Giovanni gets back with the symphony soon because I'm crazy for classical squeezebox. Ron

Yes, that Keyboard sitting up against the wall does resemble the terrifying Accordion - and of course, memories of the accordion, do bring back memories of "Ladies in Spain", which in turn make one chuckle, but not as hard as one does at the name of Mr Buckles!
I have to say that I always hated the accordion until I saw Calexico live. Played by an ingenious musician it is just that, ingenious. So there. Good luck with the peanuts.

You're right about one thing, the monkey is the star. I'm surprised he doesn't leave the act and move to Las Vegas, or at least Branson.

Glad to have entertained you. Where's my quarter?

Good. I'm not ready to turn it over to Russell yet!

High on life. It's just someone else's life.

At the money he's making on the street, he'll be sending checks to Mr. Buckles in Florida.

I'm smoking but I'm not inhaling. And I did not have sex with that woman.

Thank you, Ron. Yes, it was a wonderful performance. It's been compared to Jack Nicholson. Oh, wait a minute, that was Jack Nicklaus and not at golf!

Perry, this was plenty intriguing. Colorful with his shattered past of the gambling debt. Great story!

Oh, but you've not seen true accordion until you've seen Mr. Buckles play it! Talk about lovin' Lady of Spain ...

I'm trying to get the monkey to stay, but I just can't afford the cocaine.

Yes, Donovan was the best part of the piece I think. Even evil Mr. Buckles likes him.

Well, it was no "Gone with the Wind," but pretty close...

Thanks, but knowing me can't be a good thing!

Mr. Buckles says that you do. Don't try to deny it!

Oh, I had to laugh out loud. I played an accordion for many years, and "Lady of Spain" was definitely part of the program. Cute, Perry.

Thanks, bet your Lady of Spain was magnifico!

Super story.
And nice plug for the wee Glasgow boy, thanks!

With a sense of humor like yours I am not surprised you only saw an accordion. Same goes for Russell. I wonder if there is something to that.

Not so wee anymore, I fear. Thank you!

I'm afraid there is definitely something to that!