Mind Very Much If She Smokes 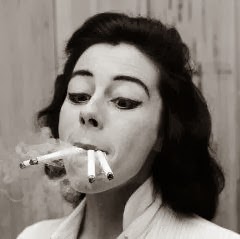 Among all the bad habits you can acquire over the course of a lifetime and which I in fact have acquired, smoking cigarettes isn’t one of them.
Most young people take up smoking in order to be cool. I knew as a kid that taking up smoking had as much chance of making me cool as starting a crocheting club for teenage boys. And so I grew up uncool, but smoke-free.

Who on earth would still be a smoker these days? Well, my friend Ellen, for one.

"You're still smoking?" I said to Ellen when I visited her last week. "Why don't you give it up, and be like me?"

"You just answered your own question, Perry," said Ellen.

"Perry, we're outside the house and I'm facing away from you."

"I think it's an updraft. It picks up the smoke, catches the Gulf Stream, and whips it all around the planet and back to me."

"Nice try, but you're more likely to be choking on pipe tobacco Benjamin Franklin was smoking in 1763 that's time traveled."

"Ellen, I’m just trying to be a friend and put into practice what I heard years ago in an anti-smoking commercial - Mind very much if they smoke!"
"But, Perry, I'm addicted!  Haven't you ever been addicted to anything?"

"Yes, I’ve been addicted to something since I was 11. But it hasn’t killed me yet!”
I showed Ellen the warning label on her cigarette pack. I'd no idea the warnings had gotten so frank and explicit over the years.
WARNING:  What are you, a nut job?
This'll turn your lungs into Gary, Indiana!

"See this, Ellen?" I said brandishing the pack. "What do you have to say now?

“I love the song Gary, Indiana!”
This situation caused for desperate measures. I leaned over and planted a kiss right on Ellen's smoocher! It had been so long since I had done such a thing I almost couldn't find her smoocher.
“Perry, what are you doing? We're friends!"

"I'm just putting into practice something else I once heard on an anti-smoking commercial - If she reaches for a cigarette, give her a kiss instead."

"That was absolutely the most unexciting kiss I've ever experienced."

"Oh, I agree. I'd derive more tactile pleasure from pressing my lips to a plate of three day old oysters."
I kissed her again.

"Perry, that was the lousiest kiss ever," said Ellen. “One more of those and I'm a lesbian."

"Ellen, one more of those and I'm a lesbian! But have you noticed something? It's stopped you from smoking!"

"You’re ... you're right, Perry! Your bland insipid kissing has worked!"

"Kiss me, you fool!"
And so on that day I had my first make-out session in many a year. It was about as erotic as a mutual fund prospectus and as devoid of passion as a performance by Nicholas Cage, but it did the job for my friend Ellen, who's now flushed her cigarettes down the toilet and taken a job with the American Lung Association.”
Ladies and gentlemen, allow me to propose the strongest labeling yet to be placed on a pack of cigarettes:
WARNING: Continued smoking of cigarettes
may expose you to the risk of being kissed by Perry Block!

Put that in your pipe and don't smoke it!

Even in France you make me laugh!

Still laughing. Loved the GPS for smoochers! You've outdone yourself, Perry, with this really funny article *blowing smoke rings at ya* JRD

In France, Libby? Quick, hand me a Gauloise! Now, smoking those IS cool.

Thank you. I knew that a post that warned of the horrible effects of smooching with me had to be a winner.

Parental controls on your computer--Ha! You HAD to bring up the prom date, didn't you? Every time I see folks standing around outside their building with their cigarettes to keep them warm, I'm glad I never started.

Me too. Because if I were addicted, I wouldn't be able to stop by kissing myself! Thanks for writing.

I hear RJ Reynolds has put out a contract on your smoocher. So far, no one has applied, fearing the job is too dangerous. They've all heard that old Jewish saying . . . if lips could kill . . . .

Oh, c'mere and pucker up, Russell!

Perry, this is a good story. I know how hard it is to quit smoking because I smoked for 40 years and didn't start until i got to College. I also liked your very entertaining mini-autobiography. Thanks, Nan

Thank you, Nan! You came back to read one of my old stories! Of course, my entertaining mini-biography is 100% true, including the part about being rugged and briny.

I'm so glad you're happy even though there was no self-immolation, huge explosions, or melting eyeballs. You're making progress, Kz.