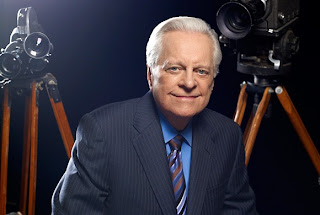 In Remembrance of the Great Robert Osborne

Indeed I do love me my Turner Classic Movies (TCM)!

The great and even not-so-great films of the 30's, 40's, and early 50's speak to me in a language I can understand better than that of current film, especially since it's a language in which the actors' mouths are generally more full of bon mots than the genitalia and pubic hairs they are today.

And AHHHH!, the great actors of the period!  Harry Davenport, Edward Everett Horton,  Henry Stephenson, Guy Kibbee,  Jonathan Hale,  Henry O' Neill,  and so many, many more.   You know the names.

I'm talking, of course, about the character actors, the folks you see all the time but usually see right through whenever you see them. These are the performers who typically played bosses, judges, doctors, politicians, and even passersby who give a lift to a hitch-hiking Bogart, help a fainting Ann Sheridan off the sidewalk and onto her feet,  or tell Ronald Reagan to get the hell out of the way, who does he think he is, the President of the United States?!!!

Funny thing about the movies of the 30's, 40's, and early 50's; any role for a character conceived of as sophisticated, accomplished, or even in minor authority had to be filled by an actor who was:

Sure, the stars of these films are young.  But just look around at everyone else.  It's as if some cataclysmic disaster has destroyed everyone on earth under the age of 30 except Ray Milland and Ida Lupino!

It was quite a different society back then.  Not only wasn't it a felony to be over 50,  it was thought that while younger people had all the fun, it was the oldsters who did all the heavy lifting. Other than the male character who's the love interest, even the most devoted film fan would be hard-pressed to find the professor, bank president, or Ambassador from the Court of St. James who wasn't a Turner Classic Geezer.

Imagine Clark Gable and Myrna Loy as two reporters in a 1930's movie going to visit the world's most renowned expert on economic development in South America.   Think that role is going to be played by Jean Harlow?

Now let's flick on HBO and catch the remake of the above movie starring Jake Gyllenhaal and Anne Hathaway and have a bit of fun.  In place of the young actor actually playing the South American expert, let's drop in a Turner Classic Geezer, someone like Henry Stephenson,  and ....  3, 2, 1, ACTION:

Gyllenhaal: It's a pleasure to meet you, Professor.... What!!!?? There must be some mistake!  You don't have big boobs!

Hathaway: Why, Jake, even my smallish but well-exposed tits are larger!

Stephenson: Well you see, my young friends, I'm a man.   A man who's studied economic growth in this part of the world for over 40 years.

Gyllenhaal: But that would make you as old as my dad!  And my dad's too old to be in home movies!

Of course much I as like these great older actors,  stereotypes of the time had their ill effects. Not only did they keep a diversity of character actors who were younger, female, of color, or Asian or other non-white nationality from finding work unless the role being cast called for a stereotype, they also played a role in helping to impede progress toward equality in society at large.

However,  those multiple limitations of the past have now given way to one great big fat limitation of the present.  These days an actor can be any flavor of the rainbow and still be readily hired as long as he or she ain't wearing a felt hat, a double-breasted suit, or a wrinkle or two below the eyes.

So, it's with a fondness that's only slightly guilty that I flick on the good old geezers of days gone by.  Thank you for bringing 'em back, TCM.