And What Are You Doing for the Holiday, Perry? 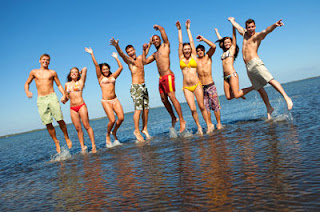 Well, it sure as hell ain't this!

It's getting so I just don't want to ask anymore.

"What are you doing for the holiday?" I inquire of that scattering of random people I encounter in the week leading up to Memorial Day.

~"Oh, yeah, we're going to the shore with the family.  Rented a place for a couple of days down in Longport."

~"Going to the club, of course. Take in a round of golf, the pool's open, and there's barbecue with tons of shrimp and King Crab legs."

~"Majorca again.  Wanted to stay home at our Olympic sized pool and have everyone we  know except you over, but the Duke and the Countess just insisted."

Inevitably, of course, by asking the question, I've asked for it back.  And back it comes.

"And what are you doing for the holiday, Perry?"

"Well, umm,  think I'll take a walk if it's not too hot,  try to straighten out my Verizon bill,   then drink myself into oblivion."

I know, I know, I shouldn't lie like that. I probably won't take the walk.

"OMG!"  I shouted aloud. "There  are fewer people in here than television shows without Betty White!"

The same proved true inside the Bed Bath & Beyond.

"OMG!"  I said to the check-out guy, "there are fewer people in here than there are television shows without Betty White!"

"Of course," he bellowed back. "Everybody's down the shore. I'm only here instead of Wildwood because I'm being paid double time!"

Kind of dejected,  I went to get a bite at a nearby neighborhood restaurant I thought might be open. And as it turned out, thankfully, it was!

said the sour-faced not-all-that-attractive young girl at the door with all the enthusiasm she couldn't muster.

"Oh, I'm so glad you're open!"  I said, feeling joy I've not experienced since the Phillies won the World Series in 2008.

"All alone on Memorial Day and coming to Applebee's?" the hostess whispered to a pimply-faced waiter who came up next to her.

"This guy must be such a loser," he murmured back, "I wonder if even we should serve him."

"I'm afraid I don't have a reservation," I said eagerly.  "I hope that's all right."

"A reservation?!!" the waiter replied.  "OMG, buddy, there are fewer people here than people who would willingly discuss politics with Ted Nugent!"

And so it went, and so it goes.  A three-day holiday is a terrible thing to waste. Maybe one of these holidays I won't waste it.

Say, what are you doing for the holiday today?

Why don't you stop over?  I don't have an Olympic size swimming pool, but I do have me a blow-up one.  Sorry, I don't have any shrimp, but I can barbecue you a hot dog which contains trace elements of beef .   If you want, we could even drink ourselves into obliv ....

What's that?  No thanks?  You'd rather discuss politics with Ted Nugent?