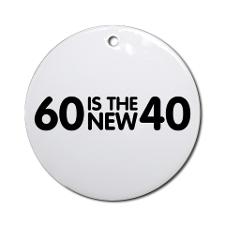 Here's another in our continuing series illustrating why the aphorism above, while comforting, is a load of crap.  We've been at this so long I actually was 60 when it began!

1) When Somebody who is 40 hears the song “The Little Old Lady from Pasadena” they think it’s the Beach Boys.

2)  Somebody who is 60 experienced a time when people hearing “we'll have a gay old time” in The Flintstones’ theme didn’t think it meant Fred and Barney were married.

5) Somebody who is 40 probably thinks a click dial is an annoying little bug that bites you at night.

6)  Somebody who is 60 remembers when a fixer was the guy who came to your house to repair your RCA Victor television set, said "I gotta take it into the shop," and you didn’t see it again for two weeks.

7) "Why? Because We Like You" - Somebody who is 40 probably thinks this is the name of a self-help book that was popular in the 70’s.

9) Somebody who is 60 grew up without ever talking about the importance of being “hydrated.”

10) Somebody who is 60 used to go in the school hallway and fold themselves against the wall into a ball during air raid drills. If somebody who is 40 had done this, they would have been about to throw up.

12) Somebody who is 40 probably thinks Winky Dink was another cutesy name for you-know-what.

13)  “And now the dear boy himself - MERVIN!” Somebody who is 40 couldn’t tell you what that quote refers to, who used to say it, or for that matter, who the hell Mervin was!

14) Somebody who is 60 remembers the indignation they felt when Star Trek was cancelled. Even the most dedicated Trekkie who is 40 never experienced that feeling and never can or will.

15) Somebody who is 60 grew up without ever hearing the word “meme.”

17)   Somebody who is 40 grew up without ever hearing the names Dwight, Adlai, or Dag.

Fill in the missing word:

19)  During the years they were growing up, somebody who is 40 had heavily impressed upon them the critical importance of flossing your teeth, not just brushing. You still don't floss.

20)Somebody who is 60 didn't blink an eye at the lyrics to the theme to Green Acres "You are my wife!" "Goodbye City Life!" as Eddie Albert yanked Eva Gabor to the country life totally against her will.

21) When someone mentions the word "turkey" and it isn't Thanksgiving, Somebody who is 40 does not think turkey neck! and begin hitting their neck frantically with the back of their hand.

22) When Somebody who is 60 was growing up "Super Bowl" might as well have been the name of a new toilet bowel cleaner.

23) Somebody who is 40 thinks J. Fred Muggs was Chairman of the Securities and Exchange Commission in 1957.

If you enjoyed this list, there's lots more of these in my book Perry Block - Nouveau Old, Formerly Cute and you should buy it.

If you hated this list, you should still buy it. Why?

Email ThisBlogThis!Share to TwitterShare to FacebookShare to Pinterest
Labels: 60 is the new 40, aging parody, lists

Nah, you're old too.