Merry Christmas, Mr. Trump, in Keeping with the Situation 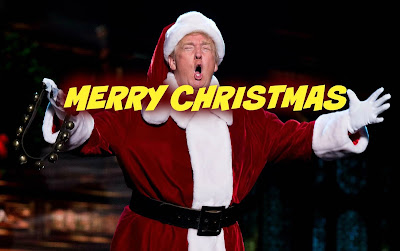 Yep, tiny Christmas balls to go with his tiny hands.

This holiday season 2017 will be the very first in many a year that Americans will be free to wish each other a “Merry Christmas!”

Instead of the bland politically correct “Happy Holidays."

I never realized we haven’t been able to wish each other “Merry Christmas” all along, but that’s what Donald Trump says and I take him at his word, even though it has never been good before.

So I set out to be the first to spread some newly liberated Christmas cheer.

“Merry Christmas, Debbie!” I exclaimed cheerfully. “I wish you a “Joyeux Noel!”

“But what, Debbie? We’re finally able to say these words right out loud without fear of liberal reprisals! Sing with me: ‘Joy to the world the Lord has come, Let Earth receive their…’”

“But aren't I kind of a strange person for you to exercise your new found freedom with?”

“Oh, yeah. Guess I got overexcited, Rabbi.  I’ll try it on someone else.”

I picked up the phone and punched in a number.

“Hello,” I said, “I’ve long been a great fan of yours and I wanted to wish you 'Merry Christmas!'

“You’re wishing me a 'Merry Christmas?'”

“Yes, indeed. This is the first year I’ve been able to wish anyone Merry Christmas in a long time.”

“C’mon, sing with me: “Good King Weseslas looked out on the feast of Steven …' Why aren’t you singing?"

Another fail!  But the way Trump talks about saying “Merry Christmas” it’s the most important event in our culture since he last changed the batteries in Melania.

Suddenly I had it! Somebody who would be thrilled to hear the words “Merry Christmas” once again.

I punched in another number on my phone.

“I just wanted to wish you something I know you haven’t heard in many years.”

“That’s all I ever hear all year long:

“You’re going to listen to that moron? He’s so stupid he’s still sending me a list every year!”

“Well, instead of ‘Merry Christmas’ what would you like me to wish you, Santa?”

Nice post, Perry. My favorite line was "since he last changed the batteries in Melania." She does appear rather robotic. I wonder if she's programmed to scream, "Yes! Yes!" when he tells her how wonderful he is. Perhaps you should order a playmate like that.

I already have one, but she screams "no! no!" The factory says they're made to be realistic so there's nothing they can do about it. Let me be the first to wish you a "Fuck Trump." That's a greeting for all seasons.

We all know it's ridiculous, but now we can laugh about it. Thanks Perry.

Thanks, Dawn. I say "Merry Christmas" all the time to Jews and Gentiles alike. The only person I would never say it too is Trump. He should "have a lousy Christmas!"

This is actually really funny, although I really don’t want to comment on political interests, you should really share more of these at other places.