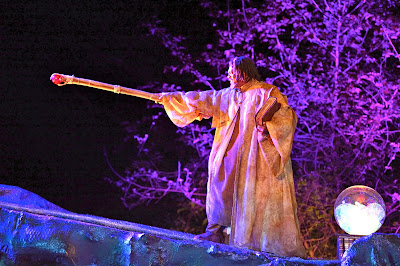 What's Past is Prologue

Just sit right back and you'll hear a tale, a tale of a mighty Duke,
Betrayed he was by his own brother,
It’s enough to make you puke.

The Duke was set a driftin', man,
But he had grit and guile,
He and Miranda landed safe,
On a tropic desert isle. 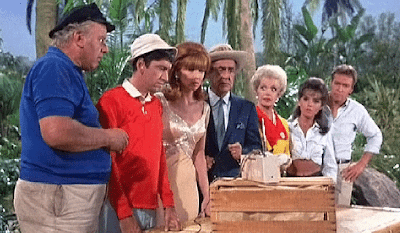 The weather started getting rough,
For another ship 10 years on.
If not for the Duke and Ariel
Everyone aboard would have been gone.

Everyone aboard would have been gone.

The ship's aground on the shore of this
uncharted desert isle,

with  Prospero, Miranda too,


Ariel and Caliban!
Gil-li-gan,
and the Rest *
Here on
Prospero and Gilligan’s Isle!
*The rest consisting of The Skipper, the Millionaire and his Wife, the Movie Star, the Professor, and Mary Ann.  Sorry none of them fits by name  in the song.  I tried.

Prospero, the rightful Duke of Milan
Miranda, daughter to Prospero
Ariel, an airy spirit (and right hand spirit to Prospero)
Caliban, a savage and deformed slave (but datable)

A tempestuous noise of thunder and lightning. Propero and Miranda, on their island, watch a shipwreck

Miranda:  If by your art, my dearest father, you put the wild waters in this roar, allay them. I have suffered to see a brave vessel dashed all to pieces! I know it was thou because the Weather Channel didst not predict this, not even Jim Cantore.

Prospero: Nay, daughter, I didst not cause the merest harm to the vessel. Nay, it was not I, but my bondsman, the sprite Ariel, who didst set the sea in frenzy. Yes, it wast Ariel, not I!

Miranda: Nicest try, my father, but thou might have done better by blaming the Jews.

Prospero:  This is The Tempest, Miranda. Checkest out The Merchant of Venice for that one.

Miranda: Were there men aboard? Thou knowest I have only seen two men in my years--- thou and Ariel --- and I hast languered in the state of horniness.

Prospero: Aye, my child, aboard the ship was my perfidious brother, the usurper of my title as Duke of Milan.

Prospero:  Usurper. Remindeth me to work on thy vocabulary. Also aboard is young Ferdinand, son to the King of Naples. I wouldst not mind seeing something develop between you two, because I'm tired of thou living in my basement.

Miranda: Hark!  The castaways doeth presently arrive unto our company.

Prospero: What is this?  A motley crew indeed!

Skipper: Little Buddy, Little Buddy, we have to get off this island pronto.  I'll be late for my weekly meeting of Burly Captains Anonymous!

Prospero: This is not the ship I wast banking on! Ariel! Ariel!  WTF!

Ariel: Homina, homina, homina! Hail, Great Master! I come to answer thy best pleasure; be it to fly, to swim, to dive into the fire, to ride on the curled clouds to thy strong bidding. I am thy devoted bondsman Ariel!

Prospero: Cut the shit, Ariel. How did you screw up?

Ariel:  There was a weather infarction. There were crosswinds. It was  an updraft!  It was due to climate change!
Prospero:  Next you'll tell me it was the Jews!
Ariel:  Nah, as you already pointed out, this is the wrong play for that.  I got it!  Caliban made me do it!


Caliban crawls onto the stage.

Prospero:  Tis true Caliban is indeed a diseased wretched cur, born of a foul and poisonous witch, an obscene and abhorrent abomination upon the earth, and a member in good standing of the National Rifle Association. Not that he doesn't have his good points.

Caliban: If I've just been complimented, I think I might have missed it.

Miranda fixes her gaze upon Gilligan.

Miranda: (looking at Gilligan) By my word, I might call him a thing divine, for nothing natural I ever saw so noble!

Prospero: She likes that idiot?! It is the third man she hast seen and she's in love?!

Skipper: Little Buddy, go for it!  I'm tired of you living in my basement.

Gilligan: (suavely) Care to help me with the bat guano, Miranda?

Professor: (looking at Mary Ann) What a fertile land for exploration, Mary Ann!

Mary Ann:  I was hoping you'd finally say that, Professor!

Professor: Yes, I'm going to set off to take soil samples, be back before the Epilogue.
Mary Ann: Not exactly the samples I was hoping to give out!


Exit the Professor.
The Millionaire and his wife approach Caliban.

Mr. Howell: Lovey! Look a native creature.  Let's take a selfie with him.

Mrs. Howell: Yes, and a most amazing and quite masculine creature too, I might add.

Mrs. Howell: Hello-o-o-o, Short, Squat, and Scaly!  How about showing me around the island?

Caliban: Certainly, Mrs. Howell, let me show you the wonders of the bush.

Mrs. Howell: I was just about to say the same thing!

Miranda: Gilligan, let us repair to a flower-laden bower where we canst consummate our burning love!

Gilligan: Consomme?  Isn't that a kind of soup?

Miranda: Remindeth me to work on thy vocabulary.

Ariel: Not much thou can doest, Master. They doth love one another.

Prospero: Verily, tis true. But now thou and I have a choice

Prospero: Which dost thou preferest? The saucy Ginger or the most sweet Mary Ann?

Prospero: And I Ginger by my troth.

Prospero: Hold they tongue, Ariel!  This is a Shakespearean romp of familie dimension!
Ariel: Sorry, Great Master, I hath been on this isle too long.
Prospero: Our revels now are ended. These our actors were all spirits and are melted into air, into thin air air.  We are the stuff that dreams are made on ...

Ariel: But in the case of this lame parody, we are more the stuff of nightmares!

Prospero:  And so we bid thee good night and farewell, and ....  Gilligan, no, watch out for that huge mound of bat guano!!! GILLIGAN!!  GILLIGAN!!!! 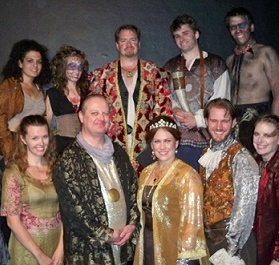 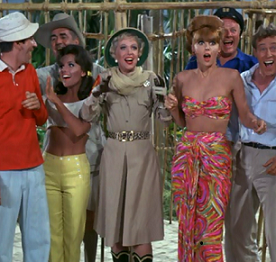 Ladies and Gentlemen, let's have a big hand of applause for our very talented cast!


Take a Bow, Everyone!

Twisted sitcom at its best. Men of all ages will argue to Ginger/Mary Ann dilemma until the end of time. Personally, I'll take one of each.

And I'll take all four of them! Ooops, I'm thinking about that story about the girl with the multiple boobs. Actually I'll take MaryAnn, but I wouldn't kick Ginger out of you know where either. If you've seen pictures of the two today, MaryAnn has held up amazingly, Ginger sadly looks like she belongs in a George Romero movie! But thanks for diggin the Bard, Russell!