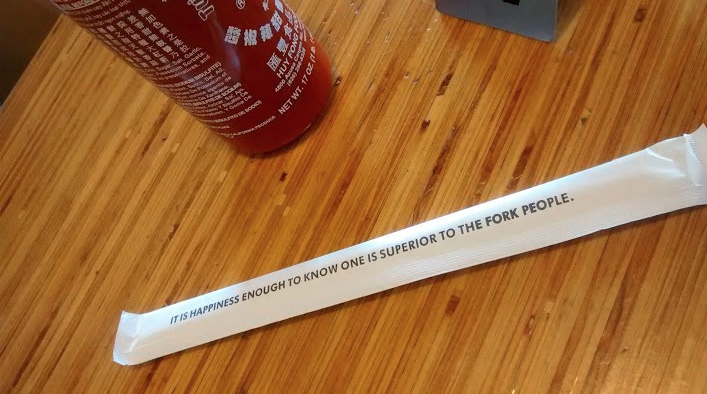 "Who were the fork people?" I asked my friend Jeff as we sat in the cafeteria where he works.

"An ancient middle Eastern people. They were advanced in some respects; used tools, built cities, had an extensive language."

"Why are they called the fork people?"

"It's a euphemism.  Their language contained some very crude expressions.  Fork, for example, is a euphemism for ...."

"I got it, I got it!  But what finally became of the fork people?"

"They evolved into stand-up comics on HBO."

Not that there aren't some comics I really like on HBO, but there are a few who totally overuse the word "fork" to the point where it's annoying and unfunny. That's something you'll never find among the souls of propriety that make up the Friday Fictioneers.

Wait, I'm sorry. That was absolutely overused, unfunny and annoying. Maybe HBO will pick me up.

As far as I'm concerned, "fork" is overused in many too many places (and I don't even watch HBO.) :-)

Perry, This program has once again eaten up my comment. It also just wiped one out as I was typing. I'm about to throw my hands up and surrender. As I was writing: Well written as usual. I don't watch much TV since I began to write and read these stories. There is still some family oriented humor on TV, but less than there used to be. Well done. : ) ---Susan

A fine riff on the malleability of the English language. When the Beatles wrote their seminal hit, Why Don't We do it in the Road they were talking about a fork in the road. so was Robert Frost when he penned The Road Not Taken. You remind me of him. Well done.

Great story Perry and it is true that some comics over use the word to the point where it turns from hilarious to just plain rude. Loved the dialogue :)

Yup, they certainly did. Some career moves are never the wisest.

Guess I'm out of the loop - no stand-up comedians watched in this house (for no particular reason.) Still, this brought a smile. Alicia

I'm not sure evolution is the word for that kind of degenerations, Perry, but good stuff as always!

Yep, Randy, I remember Jackie Mason and the finger well. Jackie Mason didn't appear again on Ed Sullivan until after Ed had been dead a few years. Not that he ever seemed alive. Maybe HBO will pick up both of us annoying, unfunny guys!

Something else you and I totally agree on, Janet. And never get HBO!

Thanks, Sandra. I thought it was forking clever!

Thanks, Susan. Even more so than on television, try going to almost any movie that's not a G and listen to all the "forking." I use the language where appropriate but every third word is just not appropriate!

Yes, I am very much like Robert Frost. Except when I got to the two roads, I became so neurotic and indecisive, I turned back home and got into bed! I didn't travel down either of them. Problem solved! Thanks, Doug!

Thank you, and I promise my dialogue will never be just plain rude but always fancy and colorfully rude.

Thank you, Barb! And thanks for keeping it clean!

Well, a few of them are making money... the biggest forkers!

Just watch your average hollywood movie,you'll get the same effect.

I can always rely on you for some humour, Perry, and although I don't know what HBO is (a TV channel?) I've heard some dreadful stand-up comics!

What the fork? Whole lot of bellship. Thanks for the combined history and language lesson.

I miss George Carlin. Cancelled HBO two months ago. I use fork in all the proper ways. I think I am good.
You are funny as always, looking forward to your next batch of craziness.

Dear Perry, You are funny again! I Know the fork people - they are friends of mine! Job well done! You are so clever and Rochelle is right - Have a good week! Nan :)

Just kidding! Great take on the notion of "fork people." I enjoyed the read.

We don't have HBO but I enjoyed the story. Did they have passports?

A clever take on present-day-so-called entertainment. Friday Fictioneers is much more entertaining.

HBO is a network of a number of channels, some of which feature pretty raw stand-up comedy. Some it is dreadful, especially when four letter words are overused, and some is very funny when they are used to punctuate the humor. And yes, they are all the descendants of the fork people!

You're welcome, Rochelle. History and scholarship are me! (Hope you recognize that for the bellship it is.)

I miss George Carlin too and many others. I wish I missed Bob Saget but then again I wouldn't actually miss him. Thanks, Snow!

Thanks for all your support, Nan. I will never say "fork you" to you!

Stick with me, Marie. There'll be much more gratuitous bad language, bad taste, and bad writing to satisfy any member of the Friday Fictioneers!

No, they all migrated from their original homes to North America over a land mass that is no longer present today when they heard there were jobs at HBO.

Amen to that. Especially you and me.