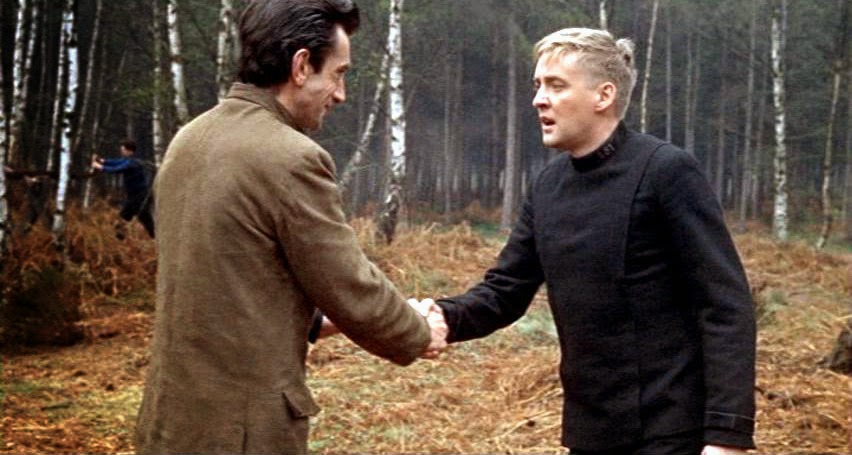 Montag walked slowly toward the fire and the five old men sitting around it. He did not know what to say to them, but he was exhausted from his long journey and the fire was warming and comforting.

“Sit down” said the man who seemed to be the leader of the small group.  “Have some coffee?”

“Thanks,” said Montag, raising the offered cup to his lips and taking a much-needed sip. “Thanks very much.”

Granger nodded.  “Yes, we know much about you, Montag. We know that the State has been chasing you. We know that you oppose them and everything they stand for, just as we do.”

“Are you the Book People I’ve heard tell of?” asked Montag.

“No, of course not!”  exclaimed Granger. “Books are boring and stupid and take way too long to read!”

“Well, then who are you?” asked Montag.

“I didn’t know there were such people!" marveled Montag.  "So you keep alive the knowledge expressed on social media of great thinkers, artists, leaders…”

With that, one of the men from around the fire, a short middle–aged man with a bulbous nose and a face lined and ashen, came forward.

“Montag,” said Granger, “how would you like to once again enjoy the collected tweets of Kim Kardashian?”

“I am @KimKardashian,” said the man with the bulbous nose.

“And Mr. Caldwell here is @KingJames, that is Lebron James.”

“How do you do?” said Mr. Caldwell. “I rebound like a motha humpa!”

“And this other fellow here is @maroon5 and this one is @rustyrockets, you know, Russell Brand.  And this man here at my elbow is a non celebrity but a great Tweeter, @SparklingDodo.”

“You see, Montag,” said Granger, “it began with a few of us who were totally addicted to social media. Most of us had already lost our jobs, families, and self-respect. When the great banning took place, we stored the important knowledge we loved right here" ---  Granger pointed to his head  --- "until the day it can be downloaded again.”

“But there must be something more stimulating than @Kim Kardashian and @SparklingDodo,” Montag asked.

Montag's stomach sickened, but his eye was attracted to two figures a short distance away from where he and Granger were standing.  One was an elderly white haired man lying in a makeshift bed who appeared to be speaking in low tones to the other, an eight or nine year old boy.

“What is going on there?” he asked Granger.

“That older gentleman is @Demilovato,” said Granger. “He is soon to die and he is transferring everything he knows to the boy.”

The elderly man looked expectantly at the boy.

“Woot! WooHoo!” said the boy. “My skin looks awesome after my @ReneeRouleau facial.”  The boy paused, straining to remember the rest of the tweet.

"So what do you think, Montag?" said Granger, turning about. "How'd you like to be LinkedIn endorsements? Even we think they're stupid, but they've gotta be covered."

“Oh well,” said Granger, “come sit by me, @SparklingDodo.   I want to hear all about how much you loved Fifty Shades of Gray, our one and only book, also known as Mr. Leonard Farbman.”

Clever concept with crisp, well written dialogue. This is one of your best, Perry.
I was worried that they might burn "The Perils of Heavy Thinking." I guess I don't have to worry about that until it comes out on ebook.

Ha Ha This was fantastic, Social Media People what a great idea.