I've been wearing a beard for over a year now and by now the beard has become as much a part of my persona as a largish nose, spindly legs, and a spine that rivals Lombard Street in San Francisco in its defining characteristic of world's curviest.


Isn't it ironic that when you reach your sixties, you do things to try to make yourself look younger that you would have done in times past to look older?

There was, however, one thing about the beard that clearly did make me look as long in the tooth as Dracula on a hot date: 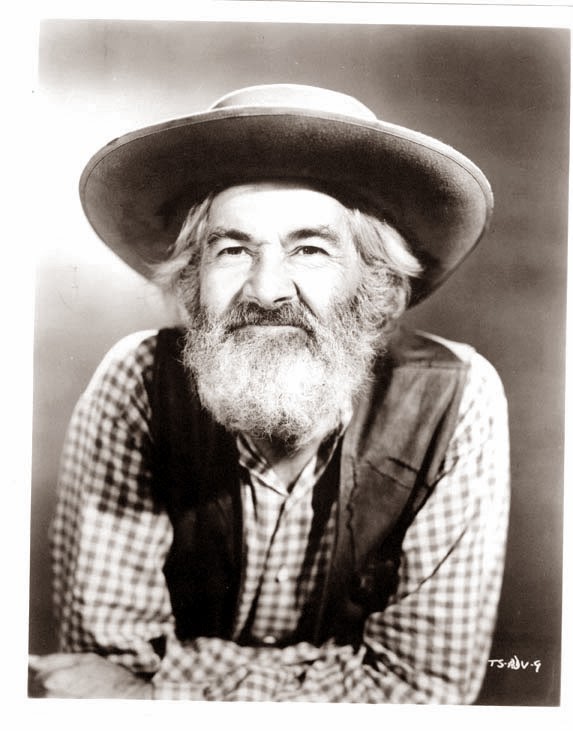 Its fleece was white as snow!

Yes, my beard was totally gray, as gray as the combined beards of actor Donald Sutherland, CNN newsman Wolf Blitzer, and cowboy Roy Rogers' grizzled sidekick, Gabby Hayes.  You probably don't remember Gabby Hayes, but rest assured if you're growing a beard to look younger and cooler, your role model is not going to be Roy Rogers' grizzled sidekick, Gabby Hayes.  And few were comparing me to Donald Sutherland or Wolf Blitzer.

Finally someone sat me down and told me frankly that the all gray beard was making me look older and to dye it or give it up!  That the person doing so was Santa Claus gave the advice that much more credibility and immediacy.

In our youth obsessed culture, even a product meant for bearded middle-aged guys is marketed via someone who looks like he's too young to shave.

With the box of Just for Men now opened on my bathroom sink, I faced a perplexing dilemma.  How much gray to take out and/or leave in the beard? If you remove it all and make the beard totally dark, it looks like your face has been attacked by an insane bootblack from Pennsylvania Station circa 1957.

But if you take out too little, Roy Rogers is likely to spring to life and ask you to help him form a posse. 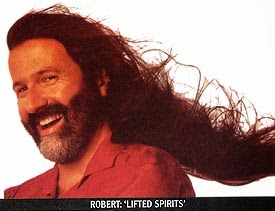 And then I was finished.  My beard was a crazy quilt of colors.  The gray chin patch that looks so cool on Mr. Robert on me came out looking more like a chin dipped in vanilla ice cream. And there was more Just for Men on the sink than on my face.

The truth is unless you've marked off a precise gray/brown designation for your beard like you were surveying the Mason-Dixon Line and you touch it up every couple of days, every application of the stuff will turn out differently.  Time lapse photography of your face over a couple of weeks would show the gray patches moving swiftly across your beard like clouds on Doppler radar.

But with it all, after many applications to my credit, I’m starting to get the hang of it. My sink no longer looks handsomer than I do. And Gabby Hayes has been banished once and for all.  Santa Claus would be proud.

So tell me, is the Just for (Vain) Men working?  Do I look younger?

Whaddya mean wipe that ice cream off my chin?!!

You shoul use the Loreal it lasts six weeks. Lots ofen do but don't tell them I told you.

Damn! All this time I've been adding silver to mine (and my scalp too) to try and achieve that "distinguished" look. That's what I get for listening to the world's most interesting man. Obviously, he's full of shit. I should have known better. I feel like such a fool.

My lips are sealed! By the excessive blobs of Just for Men, that is.

Yes, you should have listened to the new World's Most Interesting Man --- me! I'm not full of shit, it just looks like I have shit smeared all over my beard.

Don't believe him, Russell. Perry with always be full of shit. He can't help it. It's in his blood.

Well, it's nice to be consistent, isn't it? Unlike the wavering color of my beard, I'm always otherwise full of shit!

I wish Gabby Hayes were alive to comment on this.

I saw this was just for (vain) men, but I had to see what ya'll were up to. I could envision the gray patches moving across your beard like Doppler Radar. Made my day. I need to get a life.

Your life is fine, Patti, from everything I read. Just keep parking it here occasionally and giving me your sage comments. Love to have them!

I tried Just for Men, but it burned my babyface and I had to stop. Now I just look old. Old and tired. It's so depressing.

You're a nice guy, Mike, and that's what's more important. Actually it's not, but it should be! Thanks for writing.