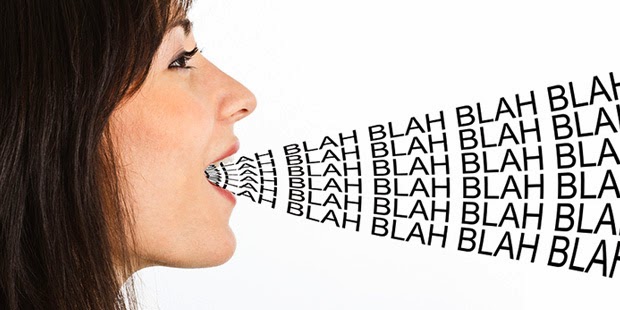 As we sojourn down the road we call life, we oft encounter people who are inclined to use certain annoying phrases in speech over and over again.  You know the kind of phrases I mean --- pet phrases like "when all is said and done," "it was to die for," and "getting up to speed."

Phrases that are one long fingernail scratch on the blackboard.

It's known as the Pet Phrase Pet Peeve Conundrum.  People who repeat annoying phrases like these ad nauseum --- often several times in the same conversation ---usually don't realize they're even doing it until one day they discover a crazed friend or acquaintance with his or her hands wrapped tightly about their throats. It would be far better if we could give these folks the message before it reaches this stage.

I believe it can be done.  How? By gently drawing the offender's attention to the phraseology that drives us crazyeology with a  subtle well-chosen riposte.

It's a who struck John. ---  Who is this guy John?  He must have the crap fairly well kicked out of him by now!

Six of one and half dozen of another --- Really?  You mean six eggs are exactly the same as a half dozen diamonds?

I'm going to reach out to George --- I hope you have a long reach, since you live in Pennsylvania and George is in Wyoming!

The long and the short of it. --- I don't mind you're talking about the Verranzo-Narrows Bridge, but stop talking about your penis!

He said/she said --- You left out "I said/you said." Where did you learn to conjugate verbs?

At any rate --- So you're the one in charge of my cable bill!

Woo Hoo! --- Never heard that said aloud before.  Hope you don't mind my hands wrapped tightly about your throat!

Hopefully these and other subtle responses of your own devise will help you and your friend, acquaintance, or even loved one conquer the The Pet Phrase Pet Peeve Conundrum.  Fortunately none of this is a problem for me.  I am simply not one of those people inclined to use certain annoying phrases in speech over and over again.

At the end of the day, you and I are definitely on the same page about pet phrases.

Thank you, Glynn, for all your support. You are a great friend to writers everywhere.

Hey Perry,
I'm also irritated by catch phrases, and I cringe when a new one begins to gain popularity. Some of the recent ones that come to mind are:
Wait for it. Wait a minute, I hate waiting. There should never be waiting just for the sake of waiting. I hate this expression.
Easy-peasy: I think I first heard this in The Shawshank Redemption, but now, for no good reason, it's caught on. It's in a post office commercial. Don't even know why I don't like it, but it's not easy-peasy for me to hear.
Throw it down - The Olympics announcers (bullshitters) used this one until I wanted to throw it up, not down.
Literally - I wrote a whole blog post a couple of years ago on how stupid this one is, but it still has legs. Oh, no, that's another one.
Like - This one is ancient. I was watching Woodstock recently and people were throwing in meaningless "likes" and they're still doing it. Like I need to hear more words that add nothing.
And I'm sure there are others, but I'm too angry to think of them! Ron

With you on all these, Ron, but like any good child of the Sixties, I like like. What irritates me the most, however, are not the verbal expressions, but the two most ridiculous expressions in the world --- WOOT and Woo Hoo. I'm fine with all the internet jargon used to save space like LOL and IMHO and WTF, but why would an adult ever type WOOT or Woo Hoo?! The day I hear people starting to say them in the real world is the day I search for a new planet! Thanks for commenting.