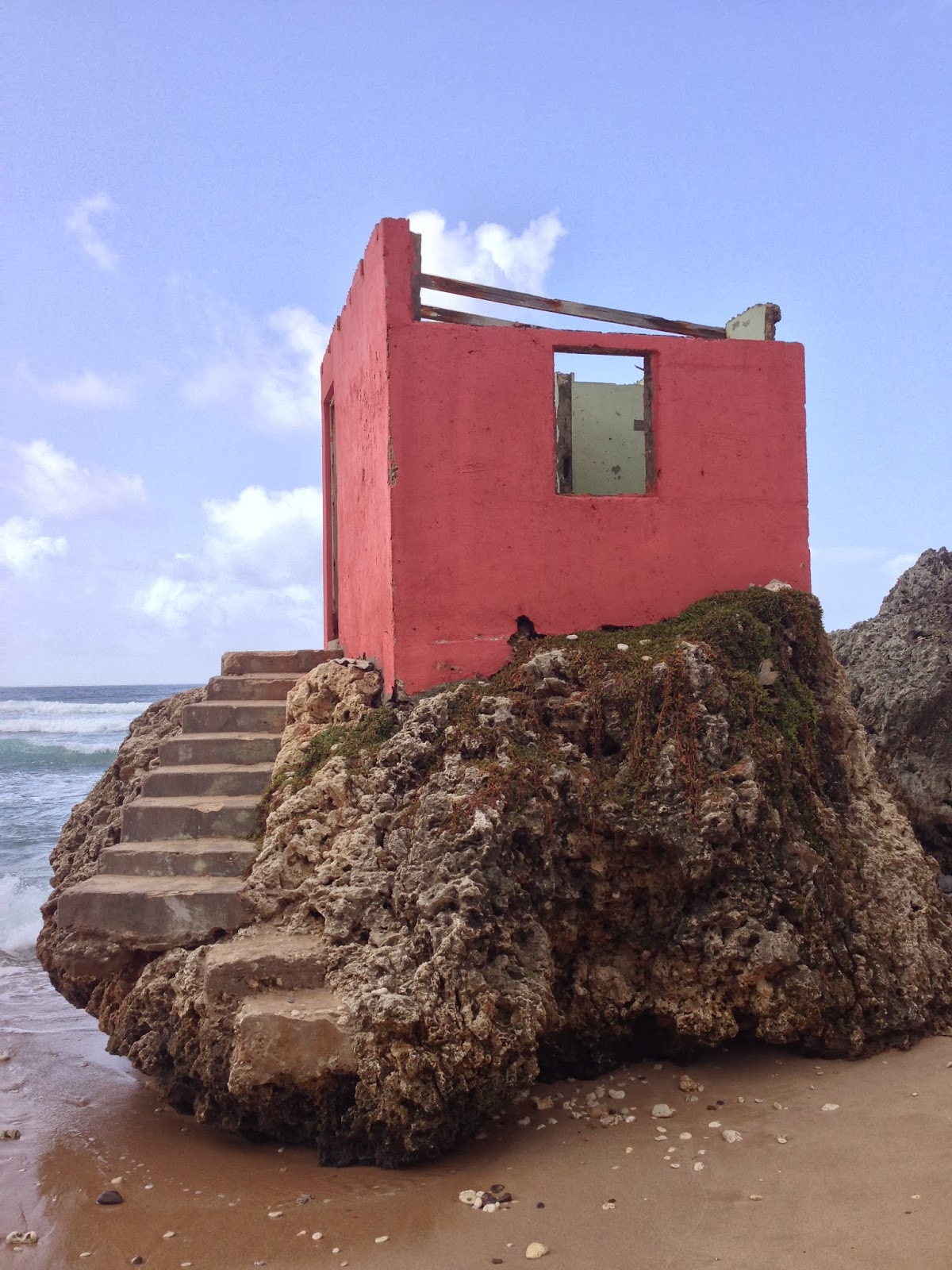 "Here goes: Ooh, ooh, and she's buying a stairway to a burgundy shack at the beach ...."

"Terrible, just terrible!  Serves us right for trying to write a song about that stupid picture you took at Brighton Beach!''

"You have a better idea, Jimmy?'

"That stinks! This is Hell trying to finish this song.''

''Sure is, Robert!  But when we do finish, I've a feeling it's gonna be Heaven!"

~~~~~~~~~~~~~~~~~
Frankly I like"Stairway to a Burgundy Shack at the Beach," but sadly that's not what was chosen.  If you want to see what the other Friday Fictioneers chose to write about this week in response to the picture prompt above, click here on your own very personal Stairway to No Place in Particular.

Well, I've gotta go climb my stairway no place in particular to take care of a Spring Clean for the May Queen.  See you next week.

Hahaha! This reminds me of the "Bridge to Nowhere" which was only half- built when work was stopped for several years, and which led only to the open air above Milwaukee. The Blues Brothers film used it for a car chase scene, so at least it served some purpose.

I remember that scene from the Blues Brothers which I think had to do with Illinois Nazis. I HATE ILLINOIS NAZIS!

Thanks. Unfortunately I didn't write the song.

What a wonderful tribute on this the 70th birthday of Jimmy Page.
70? Wow! And you thought YOU were old!

I had no idea it was Jimmy Page's birthday! What Karma! What Nirvana! WTF! (I am still way too old.)

I once read that a guy who owned a guitar shop put up a sign saying customers who wanted to try out a guitar before buying could do so. However, if they started playing Stairway to Heaven they'd be thrown out. Nice one Perry, and great song.

If I picked up a guitar and started playing Stairway to Heaven, I'd be thrown out too. Also if I played Frere Jacques. Or Why Don't We Do It in the Road. Or anything.

There are many stories about the inspiration for the song. Nice to finally know the truth.

Sure thing! It's just a little public service I'm glad to provide.

nice ^^ honestly, i like "Stairway to No Place in Particular" as a song title :) sounds more intriguing than Heaven. :)

Dear Perry,
What you're referring to is known as "Song Writer's Block" (probably some relative of yours). You would have made a great lyricist. Too bad you didn't team up with Oscar Hammerstein.

Haha! Funny Perry. Personally I think she should just rent a stairway to the burgundy shack at the beach!!

Another hilarious tale inspired by music from Little Pink on the beach.

But that would have made two lyricists and no composer! We'd have had to call it "The Sound of Talking."

We could work on that. Ya ready, Jimmy?

I agree. Those Led Zeppelin guys were way overrated compared to us!

Russell and me, we are just two rock 'n roll animals! Two bad we weren't around to guide your career ...

Ha ha!! Oh, good one, Perry. If only they would have tweaked it a bit more. I would have liked to have heard this song for reals. It sounds like a Jimmy Buffet song.

Ahh, but Stairway to Heaven would be so long! ;-) Another fun one, Perry, and great job with the dialogue! Dawn/TFTM (as the photographer, I can assure you the place was pink. Pinkish salmon, not burgundy, though)

Jimmy Buffett?!! I'm running from the shack into the sea screaming!!!

Pinkish salmon. Oh! I may want to eat it then! It is a great picture, Dawn, and lots of fun to play with. Love your on-going saga with it too!

Ha... Yes probably exactly how it happened.. Or is this a planted story?

Yep, looks like we're both on the same page with this!

Good take, Perry! From comments above, LOL at The Sound of Talking. You and Russell should take this show on the road.

Thank you. And we're working on a great number for the show 'How Do You Solve a Problem Like Ikea?" I smell blockbuster!l