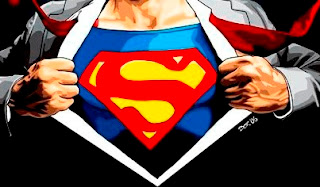 Kristi Yamaguchi:   Mitt Romney brought a huge sense of hope to the 2002 Olympics. If it weren't for him, today I'd be waiting tables at some dive in a nondescript suburb of Philadelphia,  getting groped by overage losers like Perry Block.

Jimmy Shea:  Mitt gets things done. He changed my life.  If it weren't for him,  I'd be pimping, dealing crack, and making loud inconsiderate noises in the public library.

Yes, when the 20o2 Olympics Games were in great danger, the call went out to:

Faster than a speeding bullet!

More Powerful than a locomotive!

Able to leap tall buildings in a single bound!
(And then purchase them and lay off half the workforce.)

Yes, it's Super Mitt, strange visitor from another planet.
(You can say that again!)

Who can bend steel in his bare hands.
(And invest in it too, at distressed prices.)

And who, disguised as Mitt Romney, anything but mild-mannered CEO of a great metropolitan equity investment firm, fights a never-ending battle for

Truth, Justice, and the American Way!
(As interpreted by a vocal and lunatic fringe of the Republican Party.)

"Super Mitt, the Olympics are mired in debt!  What can you do?"

"If there's debt, we have to make draconian cuts in the budget.  We'll eliminate certain Olympic events."

"What does that leave us with?"

"But, Super Mitt, that'll fly about as well as any one of your typical public statements."

"Okay, then we'll have to pare down the number of Olympians."

"Well,  that annoying Kristi Yamaguchi for one.   Oh, and Jimmy Shea - what a moron!"

"No, Super Mitt, people want to see them."

"Well, we're not going to raise taxes on any millionaires to host the Olympics!"

"No one's suggesting that, Super Mitt."

"See that?  Super Mitt to the rescue!  Of millionaires!"

"Super Mitt, do you want to save the Olympics or not?!!"

"But you're talking out of both sides of your mouth!

"That is my greatest super power!"

Despite all this, Super Mitt flew into action and did apparently  do a pretty decent job of getting the Salt Lake City Olympics back on track.

But why not?  He's a strange visitor from another planet.
(You can say that again!)

I see the problem. Super Mitt is way more direct and honest than Presidential Candidate Mitt Romney. People must think you're talking about another Mitt Romney.

I wonder if some people read the headline and saw the picture at the top and thought it was a pro-Romney piece!

Thanks for writing, Winonah.