Captain Cautious Behind the Wheel 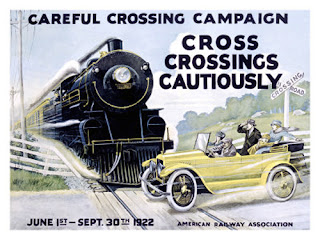 No more for me.  I'm Captain Cautious!

I recently had a minor automobile accident while driving not so far from my home. It was "minor" in that I'm still breathing.  It was "accident" in that my car is not.

Something happens to you after an automobile accident,  aside from the urge to fake whiplash and find a lawyer with the cheapest looking ad in the Yellow Pages. You begin to think you ought to be more careful, take driving more seriously, actually pay attention to the speed limits while you're blithely exceeding them.

My car had paid the ultimate price.   It was a tearful moment when I emptied out the glove compartment, trunk, and beer cans and unused condoms from the back seat.   "Goodbye, Old Paint!"  I called out.  Which in this case was literally true since the exterior of my 2001 vehicle looked like it had been originally painted by whoever Tom Sawyer had been able to con into doing the job in the 1870's.

Taking to the road  in my rental car on the way home, I noted that the posted speed limit was 25 mph,  so I slowed to that speed.  Before long came the realization that traveling at this sane, reasonable, and legal rate of speed  feels like going backwards!  Instead of moving toward my destination,  I was in fact losing ground. Given enough time, I'd find myself in the Atlantic Ocean.

Who sets these speed limits, the guy who actually drives your father's Oldsmobile?

But nonetheless, at that very moment I made a commitment.   I would become Captain Cautious Behind the Wheel!

I would never again speed to get through a yellow light unless I was being chased by Nazis.   I would become so attuned to the fact that objects in my right hand side mirror are closer than they appear that I would actually write that very phrase upon the mirror! I would brake for animals and sometimes even for people too.

I would become one with the road. Why not?  I'm not dating anyone else!

Now when I approach a stop sign,  I slow to a stop ten feet behind the sign. Then I inch forward and stop dead directly in line with the sign.

~I look 360 degrees all about me.  This is a feat that has not been otherwise successfully achieved since actress Linda Blair in The Exorcist in 1973.

~I listen for traffic reports on the twos at KYW Newsradio 1060 in Philadelphia to learn of any nearby advancing motor vehicles,  nearby being defined as anywhere in the tri-state area.

Other drivers are beginning to recognize and salute the commitment of Captain Cautious.  Whenever I am driving down a two lane road scrupulously observing the speed limit, a long line of cars forms behind me in tribute. Some drivers even sound their horns in my honor. When the lanes of travel widen, many that pass me give me the thumbs up sign as they drive by!

At least I believe it is the thumbs up sign.

I'd love for you to come driving with me some day if you have nothing to do and a whole lot of patience.  For you see ...

I am now Captain Cautious Behind the Wheel, role model for one and all!

I am also one big pain in the ass.